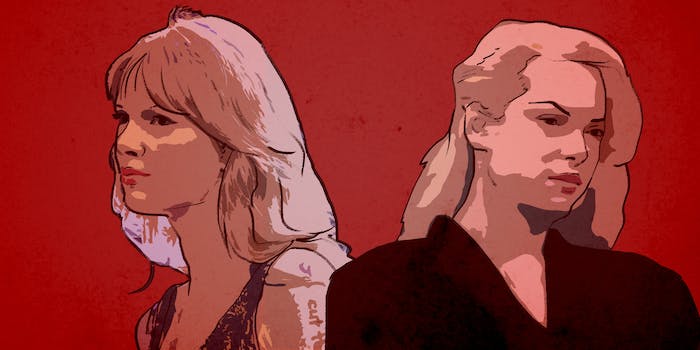 Conspiracy: Taylor Swift is a clone made by the Illuminati

They do look very much alike.

Fans and critics have their theories about whether Taylor Swift’s recently ended relationship with Tom Hiddleston was an elaborate hoax, but one theory that keeps popping back up makes a potentially fake and public affair look tame in comparison.

For a few years now people have noticed the visual similarities between Swift and Zeena Schreck (née Lavey), an artist, musician, and former Satanist, after a nearly 30-year-old interview with the latter surfaced online.

In recent weeks, Twitter users resurfaced the comparisons between Swift and Schreck as one user took it beyond a coincidental doppelganger connection separated by time. One person asked if the two were related, but another took it a step further: They’re not related, but Swift is a clone of Schreck created by the Illuminati.

Actual theory or parody? At this point they could be one in the same but playing along for the average conspiracy connoisseur is part of the fun.

2. Taylor Swift is actually an illuminati clone made from Zeena Laveys DNA, a well known satanist from 1985 pic.twitter.com/FKlQuHE59v

taylor swift is a clone of a well known satanist, zeena lavey pic.twitter.com/TguSSkNBlj

@blazedjauregui Taylor Swift is a clone of satanist Zeena LaVey. They look so alike it’s scary

When you found out Taylor Swift might me the daughter or granddaugher of Zeena Schreck, a satanic priestess… 👀 pic.twitter.com/nlhdWt2US9

update in reference to that convo

The only evidence supporting the conspiracy theory is that Swift looks very similar to Schreck from 30 years ago—Schreck has darker hair nowadays—but some people have taken to analyzing Swift’s music videos; “Bad Blood” in particular has a number of references to satanic symbols and shows Swift being reconstructed to be made superhuman or immortal. It’s pretty extensive stuff, even though Schreck no longer identifies as a Satanist; she founded the Sethian Liberation Movement in 2002 and is now “informed by the Tantric and Typhonian traditions.”

To the left #TaylorSwift to the right #ZeenaLaVey. Let’s not overlook the uncanny resemblance between the two. Some say it’s her #clone. The illuminati is known for doing this. They clone successful and influential people that will continue to carry out their sinister agenda for mankind ( keanu Reeves, mark zuckerberg, many other celebs) look into it. The video #badblood itself has a lot of satanic symbols and messages. Here it shows “catastrophe” (swift ) kicked out the window by “arsyn” ( #SelenaGomez). Then it shows swift getting her body reconstructed making her superhuman or maybe immortal. Hebrew #gematria word value for “zeena Taylor bad blood” is “identical twins” with a number value at “1330” which “33” is obviously associated with the illuminati. “Catastrophe” has an English #gematria word value of ” devil horns” and “keanu Reeves” Coincidence?? “Arsyn” has a word value for “hexagram” and “funeral” ( swift appeared dead in the video ). #musicindustry #Rapindustry #fucktheelite #fuckthegovernment #Fuckthesystem #killuminati #newworlddissorder #ForbiddenKnowledge #exposingthetruth #exposed #MURIKKKA #nasalies #Flatearth #populationcontrol #angenda21 #entertainmentindustry #hollyweird #hellywood #politics #obama #hillary  #berniesanders #DonaldTrump #presidentialelection

Of course, some people aren’t taking this seriously at all.

3.) Taylor Swift is a clone made from a DNA of Zeena Lavey, also known as a Satanist from 1985

But to err on the side of the lizard people, we can one day hope for the ultimate clone collaboration between Swift and Beyoncé’s clone. But the internet might not be able to handle that, so maybe it’s for the best.