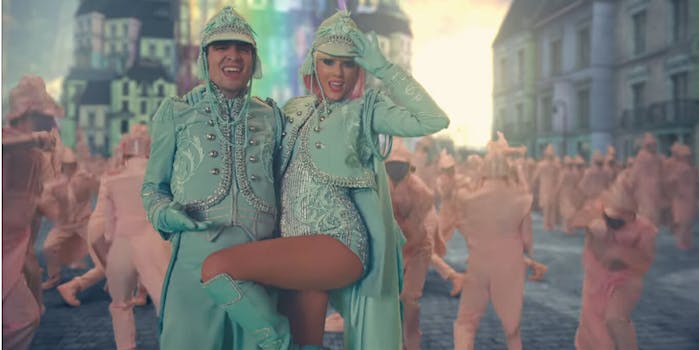 Swift is back and brighter than ever.

Taylor Swift surprised fans Friday with a new single, in collaboration with Panic! At the Disco’s Brendon Urie.

The 10-time Grammy-winner has been teasing the release for weeks. She gave fans hints about the upcoming song, as well as the album, though a butterfly mural painted in the Gulch neighboorhood in Nashville, Tennessee. Swift’s new single “Me!” dropped at Midnight on Friday and is streaming on the major giants like Spotify.

Fans were caught between rabid excitement at the newest Swift single, and confusion over the collab with Urie. For hours leading up to the announcement, people posted their theories online.

What if the❗️in ME! was a clue that it’s a collab with Brendon Urie, as in Panic❗️at the Disco?!!?! #TaylorSwiftApril26 #TSmural

Not to be loud but there are THREE cats in the mural and one of them looks like a KITTEN….and she did just talk to @TIME about how much she loves cats as one of her three things…

Once Swift broke the news about her single, she showed up in Nashville to meet with fans.

Fans were delighted at the chance to come face-to-face with Swift. Many of them took to social media immediately after to express their joy. “How can one person be so perfect,” one Twitter user gleefully wrote.

Swift friends: I made it to my car. Phone is dead & I’m crying hysterically and sooo delirious and nauseous and now I’m driving around in a daze and may never get out of The Gulch but none of that matters bc I FREAKING MET TAYLOR ALISON SWIFT AFTER 14 YEARS!!!!!

HOW CAN ONE PERSON BE SO PERFECT #TSmural @taylornation13 pic.twitter.com/Z5nJ6cBRxZ

ME wanna sleep already but this girl owns my ass so nevermind.#TSmural #TaylorSwiftApril26 @taylornation13 pic.twitter.com/XYnp5QHjo3

When people tell me to calm down about Taylor Swift #MeOutNow pic.twitter.com/SgjRXzlC7C

Despite confusion over the collab, there was plenty of Urie love to be found online, as well.

brendon urie appears as a cameo in so many music videos, collaborated with rappers, lil dicky even referred to him as one of the greatest artists, now he gets a whole ass collaboration with taylor swift. ugh we love an unproblematic talented artist who is loved by everyone pic.twitter.com/pvGY1i8vVk

Some people teased at Swift’s transformation from the darker tones of 2017’s Reputation to the bright and bubbly energy surrounding her new single.

Though I loved the darkness of repuTation, we all know that pastel Taylor Swift is >>>!!! Me! is here! HIDE YOUR FAVES!!!!! Hahahahahahahahaha! pic.twitter.com/Zyn8lqRTyh

Swift spoke with ABC News Friday about the single’s release. “‘Me!’ is a song about embracing your individuality and really celebrating it and owning it,” she said. “With a pop song, we have the ability to get a melody really stuck in people’s heads and I just want it to be one that makes them feel better about themselves.”