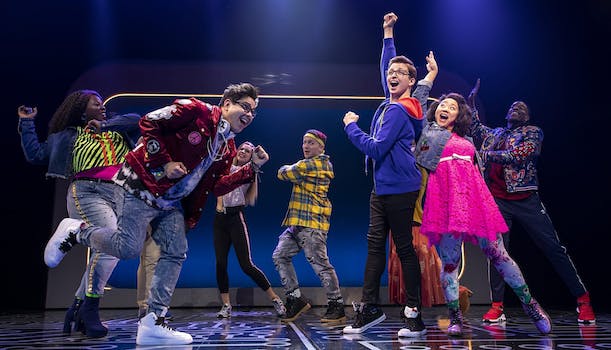 Propelled by teen fandom, ‘Be More Chill’ is a musical for the anxious

Be More Chill, the Broadway musical that opened in New York City last month, opens with a song that candidly describes the physical effects of anxiety. “I feel my stomach filling up with dread,” Jeremy Heere (played by Will Roland), the teenage protagonist of the story, sings. “When I get nervous my whole face goes red.”

Jeremy is a high school junior who just wants to be normal—or, as he puts it in the opening number, to “survive.” His social anxiety prevents him from acting “cool” and talking to girls. To solve his problems, Jeremy takes a pill known as a Squip (for super quantum unit intel processor), a supercomputer that implants itself into his brain and tells him what to do and how to act.

The sci-fi comedy, which is based on a 2004 young adult novel of the same name, has struck a chord with young people and turned into an internet phenomenon. On Tumblr, there’s fan art featuring the main characters. On YouTube, there are animated videos with millions of views. Due to all the available social channels, many attendees are exposed to the fandom of Be More Chill before they actually experience the show live—and they aren’t shy about showing their enthusiasm for certain characters and songs. During a recent Saturday afternoon performance at the Lyceum Theatre, young fans screamed when actor George Salazar walked onstage. Salazar plays Michael Mell, Jeremy’s best friend. The crowd also went wild for Salazar’s solo number about being alone at a party, called “Michael in the Bathroom.” It’s one of the musical’s most popular songs, and, again, it’s a song centered around a character’s relatable anxiety issues.

The story of how Be More Chill became a Broadway musical is an underdog success, fittingly in line with the lead characters of the show. It’s also a story about how people find music on the internet today.

The musical debuted in 2015 at New Jersey’s Two River Theater, and it only ran for one month. Afterward, the cast recorded an album. Two years later, the album started gaining traction online, netting millions of streams per month on Spotify. The album has hit more than 70 million streams across the world on Spotify, and 300 million streams overall. Composer Joe Iconis used that data to turn Be More Chill into an off-Broadway, and as of March on Broadway, production. (The play is based on the book by Joe Tracz, who died at age 32 in 2013.)

Spotify attributes some of the album’s success to users discovering it when they listened to similar recent musical cast albums, like Mean Girls and Dear Evan Hansen. “This, combined with 21st-century word of mouth, fueled the momentum,” Spotify said in a news release this week. While Be More Chill’s high school setting naturally makes it an appealing musical for a younger crowd, Spotify reports that people in their 30s and 40s are also enjoying the album. “Since the recording was first released, streaming among 25- to 29-year-olds and 35- to 44-year-olds has increased 119 percent,” the company said, “and for adults ages 30 to 34, 167 percent.” (As someone in their 30s, I can attest that the album’s pop-rock songs are highly enjoyable even if you’ve been out of high school for a while. The cast is also heavy with actors in their 30s.)

Be More Chill’s storyline is familiar: A nerdy high school student finds a tool to become more popular. And he wants to become popular specifically to impress a girl that he likes—Christine Canigula (Stephanie Hsu). It’s a plot that feels outdated in 2019, but Be More Chill manages to redeem itself with memorable songs and characters that feel real. Although “Michael in the Bathroom” is a clear favorite among fans, Hsu’s songs are equally, if not more, compelling. In “I Love Play Rehearsal,” Hsu is playful and sincere, even when she’s talking about being “depressed” after a rehearsal for theater—her true passion—ends: “But not depressed as in like kill yourself depressed. No, I’m not into self-harm. Dude, I swear, here check my arm!” The high school’s popular girls—Chloe (Katlyn Carlson) and Brooke (Lauren Marcus)—turn from cliché into complicated people. You’ll just wish you got to spend more time with them. Tiffany Mann, who plays the gossipy Jenna, also deserves more stage time.

Thus far critics have been harsh to the play: The New York Times said it was hard to understand the references and overall too young in scope and humor. However, with a movie already confirmed, it’s not difficult to understand why that critique works in favor of the project.

The most fun and engaging element of Be More Chill is its humanization of the Squip. We learn that the minicomputer takes the form of a different person for each user. For Jeremy, his Squip appears as Keanu Reeves (played by Jason Tam). The Squip’s analysis of Jeremy comes off as the negative thoughts likely running through Jeremy’s head: “Everything about you is so terrible… everything about you makes me want to die.” Jeremy reluctantly agrees with this assessment and begins making changes to his appearance and attitude to become more “likable.” It’s easy to see why this musical resonates so deeply with younger fans. For a large majority of people, high school (and, let’s be real, adulthood) is a time filled with self-doubt, anxiety, and uncertainty. Be More Chill tells viewers that these feelings are OK and normal, and is framed by a production set that looks like one giant video game.