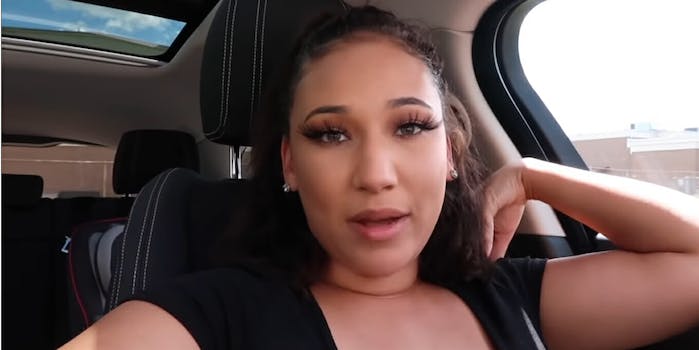 'I learned my lesson from this prank not to prank elderly people.'

YouTuber Lauren Love is facing backlash after a planned prank went too far.

The popular YouTuber reportedly received a ban from Walmart following a recent viral video. In the video, Love donned business attire and a wig in an attempt to pose as a Walmart CEO. She then made her way around a store in Richmond, Texas, and began firing employees. One such employee was Maria Leones, a former professor from the Philipines.

Leones burst into tears when Love told her she was fired, immediately prompting the 21-year-old YouTuber to backpedal. She admitted that the firing was a prank, but Leones was still upset. She told Houston channel KPRC that her husband, Eduardo, recently underwent quadruple bypass surgery. Leones said her first thought when she was fired was of her husband, as her job helps to pay for his medical expenses. “I was really so crushed,” she said. “I felt so little, I felt so powerless.”

Walmart came out in support of Leones following the incident. “This prank is offensive and the people responsible are no longer welcome in our stores,” the company said in a statement, according to Inside Edition. The company also asked YouTube to remove the video. According to Love, she removed it herself before YouTube had the chance. In an email to the Daily Dot, she also said “I haven’t heard from Walmart at all or anyone representing them,” and noted that she has shopped there recently.

Love said she didn’t expect anyone to react negatively to the prank.

“I didn’t expect to make anyone upset,” she said. “I just wanted to see if the workers would believe that I’m a real CEO. … I am truly sorry to the woman[‘s] feelings I hurt. … She didn’t actually get fired. As soon as I fired her I told her immediately after it was a prank. The prank was literally a total of about 30 seconds. I learned my lesson from this prank not to prank elderly people.”

The YouTuber posted an apology video in response to the backlash on Tuesday.

Describing herself as an entertainer, she said she was looking for an interesting video idea to make money for her children. She described the prank as a “social experiment,” and noted repeatedly the pressure that she feels YouTubers are under. Love apologized to the woman she upset several times in the course of the video.

She also explained that her video wasn’t the first of its kind. “I was not the first one that did this video,” she said. “I actually saw other YouTubers doing this video.”

There are many other YouTubers who rely on pranks to garner views, including several channels dedicated solely to prank videos. One such YouTuber, Cassady Campbell, received backlash in March 2019 for making a similar video. In his video, the YouTuber also went to a Walmart and posed as a CEO to fire employees.