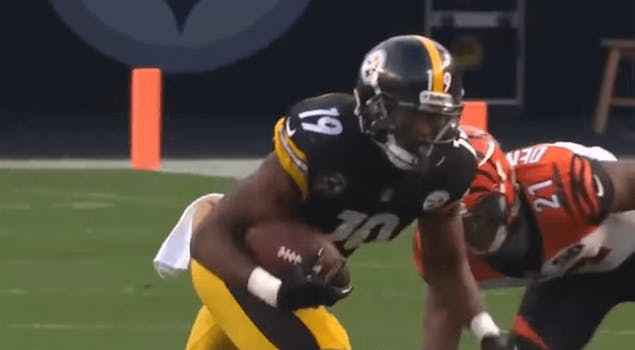 The start of the season for top wide receivers has been a brutal lesson in how consistency in the NFL is a fickle thing. Let’s have a quick peek at the top seven WRs in this year’s draft:

Is this list enough to turn us off zero RB—the sharp’s strategy of choice that emphasizes starting with top-tier WRs in fantasy football drafts—forever? It shouldn’t be. But it should give us caution.

The real tragedy isn’t the list of mediocrity above. It’s the lack of third-tier RBs who have produced. Of the top 20 RBs right now, Austin Ekeler is the only one whose average draft position (ADP) was outside round four. And in most non-casual drafts if you didn’t take him before then he was gone. A lack of injuries, which is odd, has also contributed. If you missed Matt Breida or Jordan Howard, who have only recently come on the scene, what do you have? A giant mess, probably.

Me, in frustration: “I just need a fuvking running back.”

There is little reason for optimism if, like me, you started drafts with, say, Adams-Evans-Diggs. Perhaps it was my fault all along. Adams had a new coach. Evans was in the backseat of the Godwin emergence. Vikings coach Mike Zimmer wears his Dockers backward. The writing was on the wall. Is that Miles Sanders lurking in your starting lineup?

If you’re getting desperate at the WR spot in deeper leagues, Duke Williams had a solid preseason, played a load of snaps, and caught the winning TD in Week 5. Oh, and he led the Canadian Football League in receiving last season. If you need a tight end, get Gerald Everett in your lineup. And if you’re still thin at running back after going zero RB and forfeiting the position, well, at least you only have to start two of them right?

Let’s load up the bowl because we deserve it—and get into Week 6.

Jameis Winston vs. Carolina: Writing his name and then hosing the vomit off the keyboard. 15-27-204-2. At least he didn’t throw an interception? This “Larry David pondering” GIF of a Carolina team is top 10 against the pass, but Gardner Mania just painted a mustache on them. Hopefully, they get their WR4, Mike Evans, involved more.

Jameis Winston is like an untrustworthy ex you give one last chance to and then you end up with syphilis.

Gardner Minshew vs. New Orleans: He lost three fumbles, but despite this Dave Krieg impersonation, he threw for 374 and two TDs. Normally I’d be down to fade a young QB off a big performance against a hot team. But Teddy Bridgewater appears ready to get loose and Minshew will hopefully get chances to keep up or clean up during garbage time. Honestly, if he shaved his mustache he’d actually look like Charlie Sheen from Men at Work.

Kyle Allen at Tampa Bay: They won again but it was CMC Music Factory making them sweat. Allen ended the day with 181 passing yards and a pick. On the road against a mercurial Tampa team is a great stop on this tour. Tampa is giving up the most passing yards per game in the league, 323.6, which is 43 yards a game more than the next squad. I’ll chase those numbers.

Sony Michel vs. New York Giants: A cool part of the last collective bargaining agreement was to let Bill Belichick sit in on schedule making. They get another Shakespearean tragedy put on by a high school drama club. What was the quote from Richard II? “Woe, destruction, ruin, and decay; the worst is death and death will have his day.” This applies to everyone except the Patriots because the Patriots never die. They go on forever like war and taxes.

Duke Johnson at Kansas City: End of the road, boys. It’s had its twists and turns, but now it deposits you here. There is no hope. Snap rates don’t matter. Speed doesn’t matter. The third-round pick they wrapped up in a paper bag full of Carlos Hyde’s poop and then lit it on fire sure doesn’t matter. He’s cuttable right now, but he’s also for those fanatics among us, the people who believe that after the purge, after the heavens have rained with grasshoppers and monkeys, a flood will cleanse us all and set us free. We must pray for a better world.

Darrel Williams vs. Houston: And back to the well we go. This backfield is murky, but Damien Williams was hitting holes softer than a late-night Cinemax movie. LeSean McCoy proves you can’t unteach age. This is the logical conclusion, especially since it appears Patrick Mahomes is a little hobbled. If this game is another stinker for Damien and LeSean, there’s no way Andy Reid ignores it, right? Is anyone listening?

Preston Williams vs. Washington: There has to be a winner here. Washington is top-10 worst against the pass. Williams has 30 targets in four games. Someone has to win. Say it with me.

Keke Coutee vs. Kansas City: Just four targets last weekend. Daniel Fells is catching TDs. Will Fuller is back to being superhuman. But maybe a foot race will translate to targets. Have you so desperately wanted something to be a reality, but realize the futility in it all, knowing there is nothing but failure in your future? Well, I guess you’ve never tried to write a novel.

Kansas City WR2 vs. Houston: Byron Pringle started popping and they couldn’t stop. Despite 13 targets in his last two, Demarcus Robinson has been useless. Sammy Watkins is back on the injury cart. Tyreek Hill is likely back. But in what should be a shootout, someone should emerge. If you find out the code, please pass it along.

This game is like when your dad promises you all week that he will play catch with you on Sunday, which is also Christmas day, but then he drinks too much Jameson and passes out under the tree.

Greg Olsen vs. Tampa Bay: Olsen hasn’t done anything in several weeks, but Tampa should set him right. Even Jared Cook found the end zone against Tampa and he’d been more worthless than being in Drew Brees’ Advocare downline.

Miami vs. Washington: Once again, someone has to lose.

Matt Stafford at Green Bay: 4-9 lifetime. Not exactly inspiring numbers. He did win the last two and threw no interceptions in both. But he’s on the road against a team that seems to be above average most of the time and is extremely lucky to boot. Or what was it how Branch Rickey once said, “Luck is the residue of design.” Anyway, you’d need a lot of luck if you’re tempting the fates on this one.

Mitch Trubisky: He’s on bye, of course, but I wanted to remind all of you that Mahomes and Watson are playing each other this week. He can sit and watch them. The fates have always had a wry sense of humor.

Ronald Jones vs. Carolina: I like RoJo Johnson going forward but this isn’t my favorite spot. This reminds me of Harry Caray’s drunk ass back in the ’80s. I used to watch Cubs games because we only got WGN and the White Sox were on cable. When the Mets were in town Caray would call Howard Johnson HoJo Johnson. I guess Harry and Steve Stone defined my youth. This is the satori I’ve been waiting for. It makes sense because I’m a drunk pedant.

Miles Sanders at Minnesota: A few weeks ago I expected him to break out against Green Bay. Alas, it was Jordan Howard who earned the job. He’s a firm hold at this point, but the floor is now cement and you’re standing in the basement. Look out behind you.

JuJu Smith-Schuster at Los Angeles Chargers: It is shameful to even suggest it. I hate everything about it. It’s simply not fair. It leaves a nasty taste on my tongue like Malort. But don’t expect a fruitful homecoming for the embattled breakout receiver—he’s too easy for good teams to target and slow down and the Steelers are going to struggle to get him the ball.

Jimmy Graham vs. Detroit: I might just keep writing his name here until he retires.

San Francisco at Los Angeles Rams: San Francisco has been solid against the pass, but on the road against a division opponent is not where I want to land. I’m watching the MNF game right now. And this SF squad can run the football. Perhaps if they do that… Honestly, I don’t know. Do what you want. At all times as long as you’re not harming anyone. My son is turning 2 in two weeks. Time is like a river and you have to remind yourself to relax and look at the water.