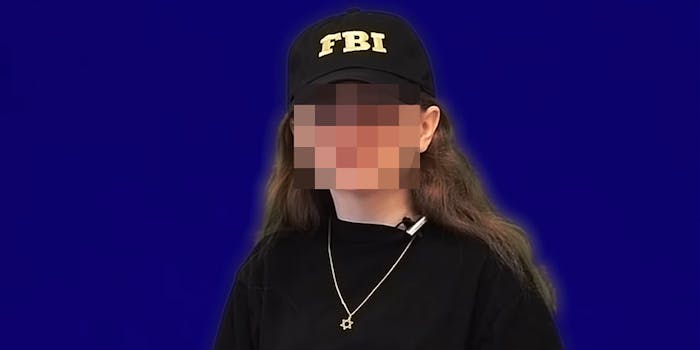 Soph tweeted, 'YouTube headquarters here I come,' along with a photo of herself holding a gun.

On August 1, YouTube terminated a far-right 14-year-old’s account on the grounds of hate speech. The teen, known as “Soph,” was booted off the platform for making an “anti-LGBTQ” video, according to BuzzFeed News.

YouTube told the Daily Dot that it terminates accounts that violate its community guidelines three times within a 90 day period. The final strike for YouTube was a 12-minute video, titled “Pride and Prejudice,” which she uploaded on July 31. In the anti-LGBTQ video, she told viewers to “make sure to blame me in your manifestos.”

In retaliation to the termination, Soph tweeted, “YouTube headquarters here I come,” along with a photo of herself holding what appeared to be an assault rifle, according to BuzzFeed News. In early 2019, she made a threat against YouTube CEO Susan Wojcicki in what police deemed uncredible since she didn’t have access to any guns at the time.

She later claimed that her threat against YouTube headquarters was just a joke, tweeting, “Gun tweet obviosly a joke.”

But gun violence and manifestos are especially sensitive subjects for the nation right now.

On Saturday, a gunman opened fire on a shopping center in El Paso, Texas, killing 21 people. The shooter posted his alleged manifesto on 8chan, merely 19 minutes before the first 911 call came in to warn police about the mass shooting. If verified, the manifesto would become the third attack priorly announced on 8chan.

“jokes aside, nothing of value was lost. there’ll be less people watching–their loss, the ones subscribed to the patreon will continue getting their money’s worth,” Soph tweeted on August 1.

Soph announced on August 2 that Patreon suspended her account–only a day after the YouTube termination. On Patreon, Soph had 600 financial backers who helped fund her videos at the time of her suspension, according to Reclaim The Net.

Soph had amassed nearly one million YouTube followers and is known for creating “satirical” racist and anti-Muslim videos.

She is currently asking for donations through other platforms and is urging others to give YouTube a “hard time” about her termination.

The Daily Dot has reached out to Patreon.