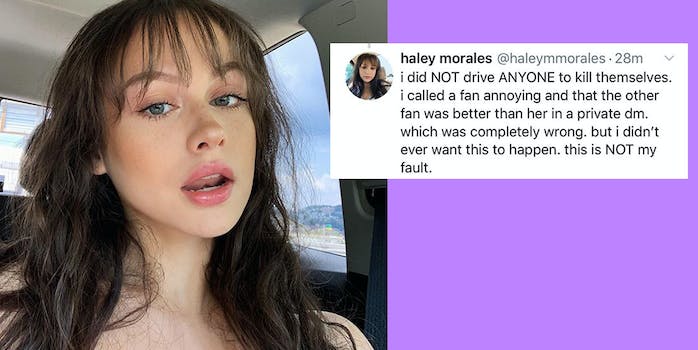 Teen YouTube influencer Haley Morales has been declared “over” by the hashtag #HaleyMoralesIsOverParty—and the reasons why are a complicated and sad mess.

Morales, 15, has built an audience of over 820,000 subscribers on YouTube and over 503,000 followers on Instagram with fashion, make-up tutorials, and vlogs. She’s been building her brand for more than three years with help from her devoted fans. Those fans at one time included Lena, a 14-year-old who allegedly attempted suicide twice this week after a leaked private conversation showed Morales speaking negatively about Lena and saying she “totally buys all her followers.”

The Daily Dot could not confirm the identity of Lena, whose Instagram account @softhvley has been deleted. The Daily Dot has also not been able to confirm her alleged suicide.

With much of the narrative being told in deleted posts, disappearing Instagram stories, private and deleted accounts—plus false information from fake accounts trying to capitalize on a tragedy—it’s nearly impossible to parse what really happened.

But a source, who requested to remain anonymous for fear of facing cyberbullying, told the Daily Dot that Lena attempted suicide a second time this week and has been declared braindead. The friend said Morales’ comments drove a mob of hate from her fandom. “Haleys fans didn’t like that haley got exposed, so the whole fandom went lena’s way threatening her,” Lena’s friend said.

But after rumors of Lena’s alleged suicide attempt spread, Lena’s defenders came for Morales, blaming her for their friend’s death. Morales tweeted to apologize, explain herself, and push back against the blame. It was not well received.

“firstly, i’m truly sorry to anyone i’ve hurt. but i’m not going to sit here and be blamed for someone’s mental health,” Morales wrote in a series of since-deleted tweets. “suicide is not something that usually pops up when you get hate, plenty of other issues caused this. not just me. i may have been a trigger and for that — I am extremely sorry beyond words. i’m in my bed sobbing for you. i’ve been where you hav. but you can never fully blame someone for a death dealing with mental health. i’ll admit i’ve done it in the past and it was wrong of me. never let someone have that much control over you.”

She continued, “i love you and never meant to hurt ANYONE. i confided in that person, trusting fans when i shouldn’t have been so gullible. i never had anything against you thought it may had seemed like it. i was in a way led on to say those things but this is not an excuse. i’m deeply sorry for what has happened.

“also, it’s disgusting how you guys can stick up for someone who is suicidal but then tell me to kill my self knowing i’m suicidal. the love isn’t in your heart,” Morales wrote.

Morales’ mother and manager, Brandi Morales, stepped into the Instagram fray at this point to defend her daughter. She did so with an iron fist, saying, “ANYONE who blames Lena’s suicide on Haley will have to deal with our lawyers.”

She also said, “you don’t think now [Haley] is going to try to kill herself because everyone is blaming her for this horrible thing?” She essentially stepped in to silence teens processing the grief of losing a friend with accusations that they would cause more suicide and threats of legal action. It is wrong for people to be threatening Morales or telling her to kill herself, but it’s not wrong for people to talk about what happened. Brandi and Haley Morales’ defensiveness only further galvanized the mob against them.

(Brandi and Haley Morales did not respond to the Daily Dot’s requests for comment.)

Another online friend told the Daily Dot that a teen who had acted as a go-between for Lena’s family and her online supporters did not wish to speak publicly. The same friend told the Daily Dot that Lena’s family had requested privacy and that all photos of Lena to be taken down. The online friends closest to Lena have not only complied but been diligent in holding others in the fandom accountable.

But it’s not just Lena’s supporters discussing the alleged tragedy. The tweets that trended in relation to Lena show the discussion quickly cast aside her in favor of a gleeful celebration of canceling Morales, who’s talked publicly about having mental illness. The hashtag #HaleyMoralesIsOverParty carried the narrative, and posts with the hashtag show clown memes, jokes, and stans for other celebrities using it as an opportunity to promote their own fandoms.

This shouldn’t be a fandom promotion fight, and it shouldn’t be meme fodder. It should be a cautionary tale of the damage that can be done when an influencer or celebrity doesn’t realize the emotional power they can wield over fans’ lives. From the bullying and threats Lena’s friends observed to the stan accounts promoting their favorite band with #HaleyMoralesIsOverParty, Lena’s story reveals some of the worst that fandom can produce: mob hate and blind support.

But it also reveals some of the best. The friend running the Instagram account @inmemoryoflena told the Daily Dot that she has messaged over 200 people to remove pictures of Lena and that most have done so immediately. The message of #JusticeforLena seems to have spread quickly, and pictures of Lena have all but disappeared from both Instagram and Twitter. The teens who say they’ve talked with Lena’s family are spreading the message that people who wish to honor Lena’s memory make their profile pictures purple and wear purple on Sept. 1. Lena’s friends say purple was her favorite color.

Editor’s note: This story has been updated.