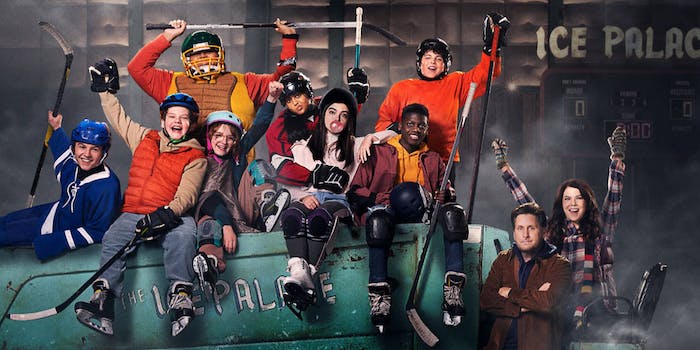 How to stream ‘The Mighty Ducks: Game Changers’

The next generation of scrappy, junior hockey underdogs.

Since the ’90s, the Mighty Ducks hockey team has changed. It’s gone from a gaggle of scrappy underdogs to state champions 10 times over. Unfortunately, the organization has let glory go to its head. The Mighty Ducks: Game Changers turns the classic hockey tale on its beak.

Evan Marrow desperately wants to join the world-famous Mighty Ducks. Unfortunately, he simply doesn’t have the Olympic-level skills the organization is looking for. His mom, Alex, isn’t going to let this rejection keep her son down.

With the help of the Ducks’ original coach, Gordon Bombay, Evan and his mom will form a new team comprised of rejects to take on the junior hockey dynasty.

Here’s everything you need to stream The Mighty Ducks: Game Changers.

What is The Mighty Ducks: Game Changers?

How to stream The Mighty Ducks: Game Changers

The Mighty Ducks: Game Changers is available exclusively through Disney+.

Disney+ offers one of the most beloved libraries of streaming content online. Namely, 500 Walt Disney Studios movies and 7,000 episodes of Walt Disney Television. It also includes selections from Pixar, Marvel, Star Wars, and National Geographic. They’re all members of the Disney family. There’s also 30 seasons of The Simpsons. Plus, like any streaming service worth its salt, there are exclusive original production. These include Lady and the Tramp, Wandvision, Monsters at Work, and The Mighty Ducks: Game Changers. One subscription works on up to four devices, and you can even download content directly to your device to watch anytime.