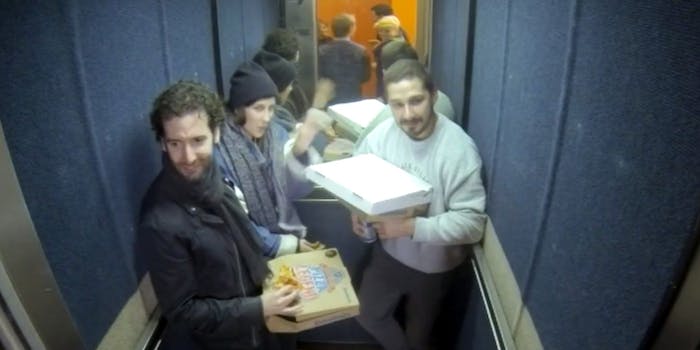 Shia LaBeouf is livestreaming from an elevator for 24 hours

'This is narcissistic,' LaBeouf said in the elevator, 'but in a way I can deal with.'

The actor is once again livestreaming a performance, this time from an elevator at Oxford University. The project, titled #ELEVATE, invites waves of people to join him and collaborators Nastja Rönkkö and Luke Turner in an elevator for a question-and-answer session. He’s planning to stay inside the elevator for 24 hours, starting Friday morning.

In late November, LaBeouf asked people to “#TOUCHMYSOUL” and call a hotline to talk to him live from Liverpool. That same month, he participated in #AllMyMovies, in which he livestreamed a marathon of himself watching his movies and became an instant meme. By poking fun at himself, he became more relatable. Two years ago, he did #IAMSORRY, one of his first hashtagged experiments in public exhibition and apology.

The Daily Dot checked in at 9am CT on Friday and saw LaBeouf speaking with two women in the lift about their “sincere energy.” He offered a joke: “What do you call a monkey that flies? A hot air baboon.”

This is an “experiment,” LaBeouf told another participant, not an “art project.”

“This is narcissistic,” he added, “but in a way I can deal with.”

What did he think about the “actual cannibal” video? “I thought it was really funny,” he said, before offering someone a Red Bull.

Later, LaBeouf said he wanted this performance to be more than a lecture at a school; he wanted it to be “egalitarian, like the Internet.”

Indeed, LaBeouf has pulled off a pretty impressive trick in the last few years, shifting perceptions of him after claims of plagiarism by essentially becoming a public experiment. Is this still just a stunt if he’s getting people to tune in and engage with him?