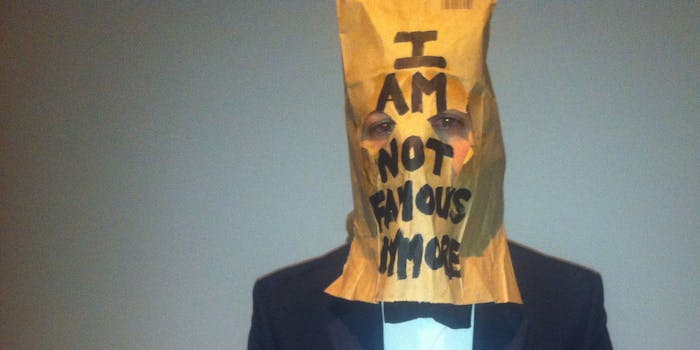 It sounded like a intriguing assignment from the start: stand in line to see the wacky Shia LaBeouf exhibit everyone’s talking about? And then write about it? For my job? For which I receive money? More than willing to oblige. And that’s how found myself in a seemingly endless line of unabashed onlookers, waiting for six hours to see #IAMSORRY and the perverse and strange man behind it.

While the inside of Shia’s piece promised to be an intimate, upsetting one-on-one encounter, the outside of the exhibit was a far more lighthearted freak show, a meeting of the minds for maniacs willing to stand in front of a celebrity’s indulgent art project for an entire hot LA day. 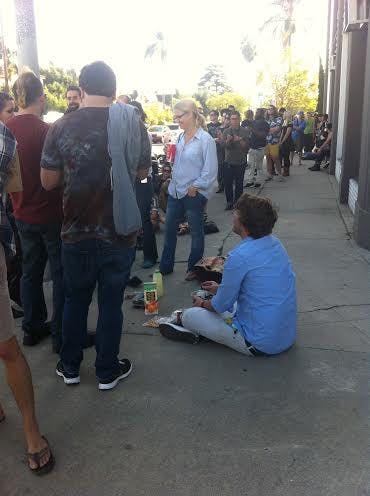 If you would’ve asked me six hours previously why I’d be upset after seeing Labeouf, I would’ve guessed I’d be cranky about waiting in line, or angered by his freshman-year art school antics. And wait I did: after an hour creeped by, I decided I’d gone too far and I should stick it out. The sunk cost was too devastating to abandon the whole enterprise. Then another hour passed. And another. I considered abandoning my position about once every 10 minutes (the Mexican restaurant across the street became my personal Gatsbyish green light, beckoning me to an unreachable utopia of guacamole), but as my mom will tell you, I got all the obstinate genes, and also I am being paid to write an article about this, so I stayed in line all six hours.

By the time I went in, my feet were swollen and I’d joined an alliance of line friends. We swapped life stories and got weird neck sunburns as the security guards refused to let us stand on the shady part of the sidewalk. There was Cougar, who’d just moved here from Austin to pursue comedy, who wanted to give Shia a sketch he drew on a napkin. Johnnie, a tap dancer with soft eyes who bought me coffee. He wanted to use the Shia room as a confessional. The young, willowy couple in front of us didn’t chat much to anyone but each other, using the hullabaloo as an accessory to their fresh romance. Everyone around me was friendly, although a puppy-eager set of friends a few groups back kept talking loudly about how much they hated Shia, with one of the guys speaking about whipping the actor with a crazy glint in his eyes that made me wonder if I was in line with psychopaths waiting to see a sociopath. But that guy also gave me a cupcake so, you know, we contain multitudes.

The line kept growing. News crews showed up and anchors with big white teeth started interviewing the people waiting. Down the street, two gangly guys started putting a sign on the storefront next to the gallery: #IAMSORRYTOO. 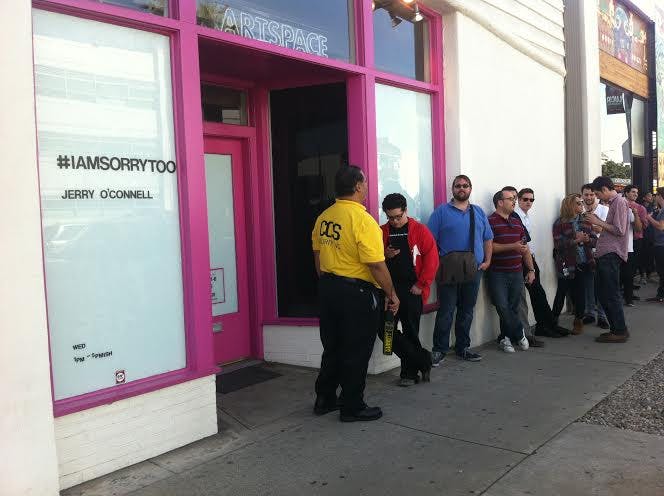 It was a Funny or Die sketch with Jerry O’Connell. Lots of people in line switched from chatting about Shia’s intentions to talking about “Sliders.” The Funny or Die team convinced a group to switch lines. People started debating whether it was worth it:

“Jerry O’Connell was in Tomcats!”

“Yeah, but Jerry O’Connell’s not relevant.”

The line was a very LA kook parade that highlighted how silly celebrity culture is, but it wasn’t upsetting to be in it. I wasn’t disturbed by the people were waiting in line; it seemed like a fairly benign way to waste a day.

As the day started to turn into evening and my patience wore thinner, all I really wanted to do was get in and get this thing over with.

But then I went inside.

When I was 15 I plagiarized a phrase in a letter I wrote to a friend. The letter had its intended impact; my friend said she felt moved to tears. Whenever I think about it I get a tiny dirty feeling, like a raisin made of lead is embedded in the bottom of my stomach.

I felt the same deep-belly sick getting ushered out the door after seeing the tears of newly notorious plagiarist, Shia Labeouf. 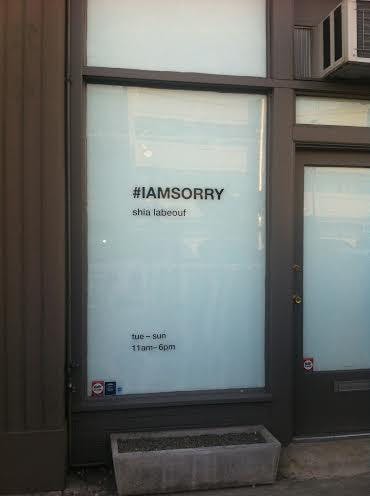 #IAMSORRY, Labeouf’s performance art exhibit going on this week at the Cohen Gallery in Hollywood, is easy to feel cynical about. On paper, there is little that distinguishes it from the rest of LaBeouf’s erratic Franco-on-crappy-acid hijinks, the ones that he’s supposed to be apologizing for—like his other stunts, this one appropriates another artist’s work: in this case, LaBeouf’s decision to sit and stare at whoever entered the gallery was cribbed from Marina Abramovic’s “The Artist is Present.”

It’s hard not to see that hashtag in front of the apology as a modifier indicating a strong wash of insincerity, or even contempt.

His now-infamous “I AM NOT FAMOUS ANYMORE” bag worn at the Berlin Film Festival made me feel uneasy, but that was something I read online; it happened far away. I passed it off as a wannabe-Joaquin Phoenix moment from some pretentious child actor who skimmed an article on neo-Dadaism.

He’s been courting the cynicism he’s been receiving all along, and the idea that LaBeouf would put on an art show that had people choose an “implement” from a table of artifacts representing aspects of his life (a Transformers toy, a bottle of Jack Daniels, an Indiana Jones whip, a bowl of mean tweets about him, a vase of flowers) and confront the actor as he sat with the bag over his head seemed so cockamamie and indulgent that I expected to go in there and roll my eyes.

Instead, I got in there, took the bag off his head, put it back on, APOLOGIZED TO SHIA, and left. He blinked at me when I asked if I could remove the bag. He didn’t smile or frown. I was the second-to-last person to enter that day, and my rush-flustered stammering didn’t elicit any unusual responses from the actor. He just sat there with red puffy eyes, hands laid neatly on the small table, tuxedo looking fresh, face looking tired. And it filled me with remorse. I felt like I violated him, and even if he asked for it, I still did it.

I underestimated LaBeouf. Even if his tears and stare were insincere, even if this is some Exit Through the Gift Shop-level media trolling, #IAMSORRY had me questioning both reality and morality, which, I suppose, makes it a rollicking success as art. When I removed that bag, I felt like I was further dehumanizing someone whose humanity I’d discounted, partially due to his recent stunts, largely because he was the kid from Even Stevens. 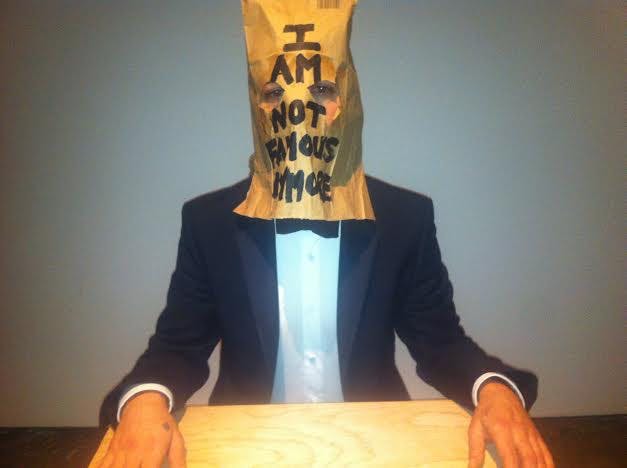 The whole thing may be deeply ingenuine, but it was genuinely disturbing: sitting across from LaBeouf, whose head-bag is ragged and tear-stained, I found it impossible not to have empathy, to feel ashamed of myself for participating in a public emotional flogging (nevermind that it was orchestrated by the punished, nevermind that it may be even less sincere than Dumb Starbucks).

I still have no idea why LaBeouf and his collaborators are putting this on. I don’t know whether it’s an “eff you” to the media, whether it’s a sincere attempt at an alternative apology tour, or whether it’s something else entirely. Maybe Shia will explain it someday and maybe he won’t. I’m not even sure it matters what the intention was. The encounter he set up was effective; it knocked participants off-kilter; most of the people I talked to afterwards who went in were thrown off and taken aback by the experience, far more affected than they expected they’d be.

After sitting across from the teary-eyed prankster-cipher, I got up and left and walked past the crowd again with new eyes. We weren’t a frivolous but ultimately harmless group anymore. We were torturers, waiting patiently to emotionally poke a troubled man. We were the crowds cheering the bear on in a Roman amphitheater. We were fucking monsters.

And whether Shia LaBeouf is sorry or not, I am.