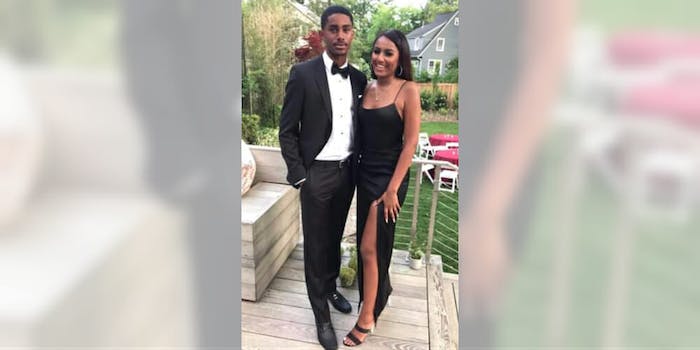 The photos are amazing.

Sasha Obama: youngest daughter of Barack and Michelle Obama, became the first daughter at the tender age of seven, younger sister to headline stealer Malia Obama. Little Sasha has grown up right the heck under our noses because our baby girl just went to prom.

The reveal came from the older cousin of Obama’s prom date, Twitter user @rugaNICE, who shared the photos Friday night.

“When your lil cousin take Sasha Obama to prom,” he wrote.

The photos are amazing.

Now 17, Obama is a high school senior graduating this spring, reportedly with plans to head to the University of Michigan in the fall.

The last time the former first daughter went viral was when she was spotted casually hanging out backstage with Cardi B and Offset at a Washington D.C. music festival last year. Likewise, people were similarly thrilled to see her prom photos surfacing, as evidenced by “Sasha Obama” trending on Twitter.

Sasha Obama went to prom and she looks so beautiful . Aunty Michelle and Uncle Barack did so well! pic.twitter.com/YPqt85kX2s

In case you’re wondering why Sasha Obama is trending, she was asked to prom and looks absolutely beautiful. https://t.co/GQhlgcEqUX

looking at "Sasha Obama" like…… THEY GROW UP SO FAST pic.twitter.com/VFsJaXj2ib

Others–perhaps due to her sister’s very normal young adult shenanigans–were just relieved to learn of the wholesome reason why Obama was trending on Twitter, as people tend to quickly assume the worst.

For example, the platform eventually learned it had to add a note when Betty White is trending on her birthday because people always assume our golden girl has left us mortals.

I saw Sasha Obama trending and got scared but she just went to prom and served looks. pic.twitter.com/Ci52eHj8jl

Saw Sasha Obama trending and my fist automatically clenched up but it’s all good because she’s just growing up and served nothing but looks at prom pic.twitter.com/An4Cb9ioXW

Luckily for Obama, children of former presidents lose Secret Service when they turn 16, as pointed out by journalist Yashar Ali. So, it will be a judgment-free, teenage fun zone.

Hopefully, Obama and her handsome date had the most magical prom night.