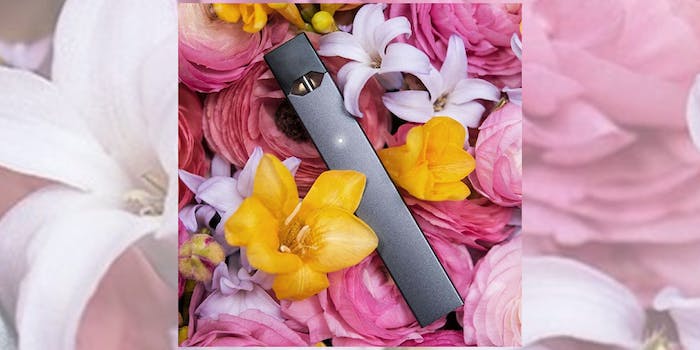 The news caught social media by surprise this week.

From Kurt Cobain to Audrey Hepburn, smoking has long been the unfading accessory of American popular culture’s cool kids. In the 21st century, however, the world’s most up-to-the-minute youth have ditched Marlboros and Newports for e-cigarettes and vapes. Former first daughter, Malia Obama, is no exception to the trend, as she was recently seen Juul’ing in London, according to Vaping360.

A Juul is an electronic cigarette that prides itself on being “unlike any other vape or e-cig.” The product was officially released in 2015 by the vape and e-cig company, PAX Labs, after which the Juul company was spun off into its own brand based on the popularity of the product. Popularized for its sleek look and ease of use, it was immediately adorned by young smokers across the world. With accessory choices, state-of-the-art vape technology, and a range of crisp flavors, Juul has become the iPhone of e-cigarettes.

Last week, photos released by AU Showbiz seemed to confirm longstanding speculation that Obama’s preferred choice of smoke is her trusted Juul. The blog revealed that she had been seen vaping after spending the evening with her British boyfriend at the London Theatre as they walked along the River Thames.

In fact, tweets dating as far back as November 2017 have alleged that Obama was a Juuler.

Even though vaping isn’t the most-surprising behavior we’ve seen from a first daughter recently, the news still caught social media users by surprise this week.

malia obama has a juul. we’re living in a simulation

malia obama has a juul

Of course Malia Obama has a juul

No word yet on what flavor of Juul pod—mango, mint, or maybe creme brulee–Obama was using.

Editor’s note: This story’s headline has been updated for clarity and context.