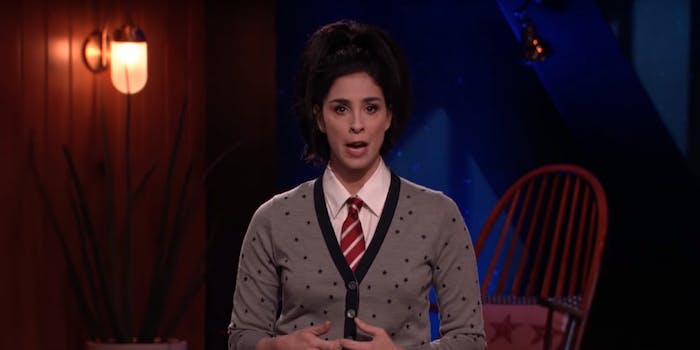 Sarah Silverman says Louis C.K. sometimes masturbated in front of her with consent

Silverman has struggled to talk about her relationship with C.K.

Though, she didn’t consent every time. “Sometimes, yeah, I wanted to see it, it was amazing,” she said. “Sometimes I would say, ‘Fucking no, gross,’ and we got pizza.”

C.K. admitted a year ago that he masturbated in front of multiple women without their consent after a New York Times article detailed the accusations. Silverman, his longtime friend, attempted to make sense of it on her Hulu show I Love You, America.

“I wish I could sit this one out,” Silverman said at the time before admitting she was “very angry” for the victims but also “sad” for her friend.

Silverman’s sister Laura tweeted last year that before he was famous and after the two briefly dated, C.K. masturbated in front of her during a road trip roughly 20 times.

After that, it’s was Louis C.K., on a cross country trip before he was famous. About 20 times. Not criminal. But compulsive, rude & gross.

Silverman doesn’t think C.K. should be ousted from the comedy community; she suggested that he mine the depths of his psyche—a thing he built his comedy persona on—and discuss his behavior onstage, which is not something he has done during his recent “surprise” sets in New York City.

“I’m not saying everyone should embrace Louis again,” she said. “I believe he has remorse. I just want him to talk about it onstage.”

C.K was recently criticized for a bit in his new act in which he lamented losing “$35 million in an hour” as a result of being held accountable for his actions.