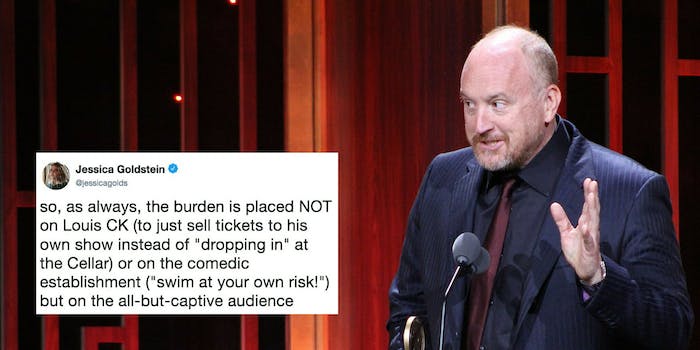 Louis CK does another surprise comedy set—women again walk out

This appears to be the mantra of Louis C.K., who performed his second set at New York’s Comedy Cellar club within a month-and-a-half of reappearing after a months-long hiatus in August. And despite being told, overwhelmingly, that his comedic services are no longer needed, nor welcome, in the entertainment industry, C.K. is driven to once again disregard the wishes of the people in the room with him.

According to the New York Times, C.K. performed his second Comedy Cellar set on Sunday, Sept. 30, amid a new “policy” “implemented” by club management for audiences to “swim at your own risk.” On club emails and inside the establishment, a message warns attendees that any comic may pop in at any time to crowd test their material. If the audience member does not like this surprise guest, they may choose to leave the club quietly, with their tab taken care of by the club.

According to HuffPost, C.K. didn’t specifically address his sexual misconduct but did say he took a “really long break” and is coming back, despite the crowd reaction not being “unanimous” excitement. While Page Six reported that at least two women walked out of the show, other audience members told HuffPost that they didn’t see anyone leave.

A recording published by the Hollywood Reporter appears to show the audience praising the performer’s introduction.

Listen to the reception Louis C.K. received when he returned to New York's Comedy Cellar for another surprise set late Sunday night: pic.twitter.com/7uBw846xIX

“I talked to a few women sitting near me afterwards, and they described a similar sense of tenuous discomfort, like, ‘Is it OK to laugh at this?’ especially some of the edgier jokes,” one of the audience members told the publication.

However, it seems not even the most vocal of protestations could keep C.K. from following his dreams of rebounding in a career that has wholeheartedly rejected him, after having served his time (read: hidden from the public while remaining uncharged for several sex crimes).

It seems comedy and entertainment Twitter is still maintaining a resemblance of accountability on the industry’s behalf.

Apparently Louis CK is going to keep trying to force a comeback, and judging by the reaction in-house he'll probably succeed and I just hate every single thing about this. https://t.co/F3nMzsz164

GO. AWAY. Especially with all this shit going on. What kind of man who has repeatedly exposed himself to women, thinks that ANYONE wants to hear from him right now? #LouisCK https://t.co/Ftl3xzH5x0

Louis CK is back whether you like it or you just stand there laughing nervously because you can’t believe what’s happening to you.

there are SO MANY women, poc, trans, lgbt+ etc comedians (and even just non-abusers!) you can go to bat for instead of louis ck, christ

Alas, C.K.’s comeback tour, as well as those of other powerful men who also abused their power, is likely far from over.