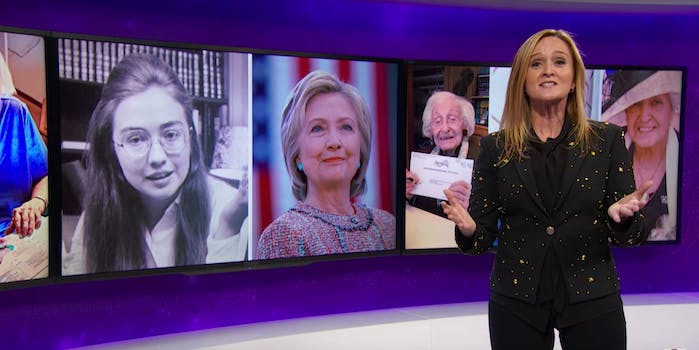 This is our fault.

With less than 24 hours left before the polls closed on this 19-month-long free-range trash fire that is the 2016 presidential election cycle, Full Frontal host Samantha Bee asked America just one final request: Let Democratic presidential nominee Hillary Clinton be the Hillary Rodham she was always meant to be.

In a segment from her final episode before Election Day, Bee delivered her impassioned argument and broke down how press and politics has molded the presidential candidate for nearly four decades.

“Spoiler alert—it was our fault,” Bee said of the candidate’s perception as being a fake, calculated politician. “We created her by slowly tearing down a badass feminist named Hillary Rodham.”

From her early days of hitching “Clinton” to her preferred maiden name after her husband’s second run for governor of Arkansas, to standing by Bill after his infidelity, and stepping back during his second presidential campaign, Clinton has attempted to respond to critics by changing her image.

Which, as Bee points out, was an effort for nearly nothing: “Oh my God, Hermione became a pageant girl just to get us to like her—not that it worked.”

The segment is admittedly depressing—Clinton is somehow lumped with Republican presidential nominee Donald Trump in being the least likable candidates in the past 10 presidential cycles, despite Clinton being a “normal, center-left policy nerd,” and Trump at his highest points being a “vindictive, pussy-grabbing hate Zamboni who jokes about killing his enemies,” as Bee so eloquently puts it.

She did, however, pull the lever for one “Hillary Goddamn Brilliant Badass Queen Beyoncé Rodham.”