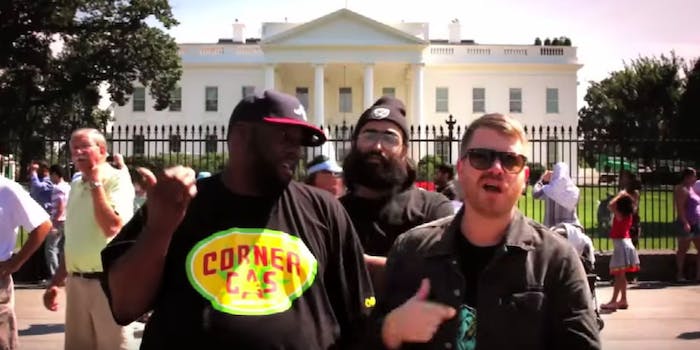 Run the Jewels rage against Trump in D.C. with surprise guest

'The day after tomorrow, this is our motherf**kin' country.'

Run the Jewels didn’t want to be in the nation’s capital the night before the presidential inauguration, but fate intervened. A break in the water line at the Echostage in Washington, D.C., caused their sold-out Jan. 12 show to be postponed a week, putting the fiercely political rap duo on stage mere hours before Donald Trump’s swearing-in ceremony. You could feel the tension in the warehouse venue.

“We’ve got one night before shit gets fucked up,” Killer Mike, real name Michael Render, bellowed early into the set. “But tonight, we’re going to fuck shit up.”

Indeed, Run the Jewels delivered a pre-emptive air raid against the incoming administration—aided by some unexpected special guests.

The unlikely duo tore through the majority of its third self-titled album, which dropped three weeks ahead of schedule before Christmas via the season premiere of Portlandia, with militant efficiency. “Talk to Me” and “Legend Has It” banged with aggro swagger, while Three 6 Mafia’s Gangsta Boo joined for the raunchy “Love Again.”

Live, the two operate like a pro wrestling tag team: El-P the more technical grappler, a submissions specialist working angles and the crowd in equal measure, and Killer Mike the dominant finisher, the one you turn to when the stakes are highest and whose effects you’ll still feel the next morning.

Both understand their viral reach and what it takes to meaningfully engage—these are the same dudes who remixed an entire album using nothing but cat sounds for a Kickstarter campaign and who have made their entire catalog available for free download on their site. More importantly, they’ve found their voice, not just on record but off the stage.

Killer Mike spent the better part of 2016 election cycle stumping for Bernie Sanders: introducing him at rallies, making the case for why he considered him the only candidate for black voters, and interviewing him for a six-part video series. (Sanders was apparently relieved to learn Killer Mike has not actually killed anyone.)

People look to Killer Mike now in times of crisis, to provide some clarity in moments of staggering confusion, like after the Ferguson verdict or, as in the case Thursday night, on the cusp of a presidency the vast majority of D.C. didn’t vote for. He didn’t disappoint, addressing both his work for Sanders and the Trump administration in his preface for “Lie, Cheat, Steal.”

I only did that because [Sanders’] words resonated with me like the words of Dr. Martin Luther King. And being from Atlanta, Georgia, that matters a lot. So I just want to tell everyone who may have worked that campaign or works any campaign, at the end of the day, no politician is your ruler or your master, or your Lord. These people work for us. We do not work for them. …

I kept the faith because every stop I made, I saw black people, white people, Asians, Latinos, men, women together. They were working together in solidarity to improve this country. It doesn’t matter who won. The day after tomorrow, this is our motherfuckin’ country. I don’t give a fuck who is president. This is our country, and what we will build, [and what will] keep this republic going, is truth, is honesty, integrity, love, and democracy.

El-P (born Harry Meline) echoed that sentiment later. “If you ever start to feel alone, take a look around,” he said. “This is your community.”

That feeling of passive resilience, which permeated much of the night, drowned in throttling bass and synchronized strobe lights, gave way to active resistance in the encore. Zack de la Rocha, the frontman of Rage Against the Machine—flown in just for the event—lit a fuse with “Kill Your Masters,” the blistering final track on the new album, altering the mood of the evening.

The world surges, the nation’s nervous
The crowds awaken, they can’t disperse us
We ain’t at your service, won’t stay sedated
Won’t state our numbers for names and remain faceless
We dignified, they can’t erase us

The moment had the intensity of vintage Rage Against the Machine—oddly fitting, given that the band eerily predicted a Trump presidency in its 2000 music video for “Sleep Now in the Fire.” The ensuing “Close Your Eyes (And Count to Fuck)” had all the subtlety of riot police.

Just when it felt like the smoke had started to clear, Killer Mike returned once more, dropping a few bars from his 2012 anti-government screed “Reagan.”