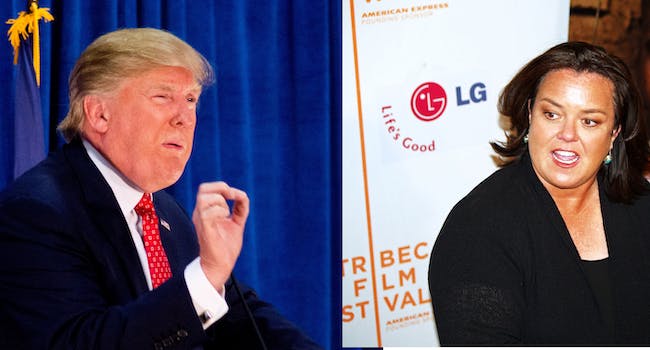 The years-long war of words between Rosie O’Donnell and Donald Trump just kicked up a notch.

Over the weekend, O’Donnell took to Twitter to share strongly worded, all-caps opinions of the president-elect through retweets of media coverage and standalone opinions about his mental stability.

TRUMP IS A CRIMINAL – https://t.co/dkhfSr4Ubc

LESS THAN 3 WEEKS TO STOP HIM AMERICA

The three-day tweetstorm is nothing new, of course. O’Donnell and Trump have a history of trading barbs on the platform. Trump, who has called O’Donnell “crude, rude, obnoxious, and dumb” in the past, specifically focused on O’Donnell during a presidential debate last summer. O’Donnell responded on Twitter, but it’s unlikely Trump saw it: Neither celebrity follows the other on the microblogging platform.

Trump wasn’t the only target O’Donnell took aim at this weekend: She also accused mainstream media of failing in its duty to call out Trump’s lies.

Several of O’Donnell’s tweets and retweets were hashtagged #Resistance or #TheResistance, for a collaborative effort aimed at stopping Trump and/or his policies and followers.

THE IS THE WORLDS WORST HUMAN #RESISTANCE #Focus https://t.co/o7UZHdvmqn

Update 9:35am CT, Jan. 12: O’Donnell now says she supports delaying the inauguration of Trump until he “is ‘cleared’ of all charges.”

I FULLY SUPPORT IMPOSING MARTIAL LAW – DELAYING THE INAUGURATION – UNTIL TRUMP IS "CLEARED" OF ALL CHARGES https://t.co/fUn8FZ8RTj

No charges have been filed against Trump, but the recent release of an unverified intelligence report has led to many questions about the president-elect’s relationship with Russia. For his part, Trump has condemned the reports as “fake news.”