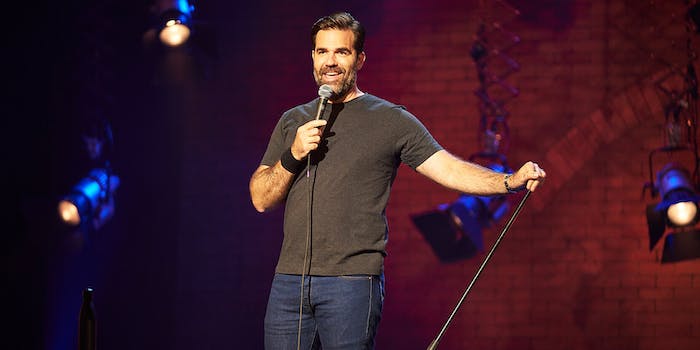 While watching standup comedy over the past few years of turbulent social change, I have identified a tedious trend that I have come to think of as Straight White Male Comedian Syndrome (SWMCS, for short). The comedians beset by this ailment are progressive men who hold all the right political viewpoints, and might even consider themselves feminists. Yet they are all, somehow, married to wives who are superior to them in every way, but are also kind of pains in the ass. They love their wives, of course, but they can’t seem to help describing them in ways that feel distancing and objectifying. These progressive men are aware of the pernicious effects of sexism, particularly in the wake of the #MeToo movement, and feel bad about it, but they haven’t evolved enough to entirely move beyond the old, tired gender binary that classifies wives as responsible, uptight shrews, and men as slovenly, irresponsible idiots.

Watching male comedians attempt to reckon with this binary in an era of increased attention to gender politics in comedy has been interesting, if frustrating. Seth Meyers, in his recent special Lobby Baby (2019), presents himself as a clueless idiot who can’t find things in his own refrigerator, unlike his vastly more competent, anal-retentive wife, but ingeniously ends his special with a long passage delivered from her point of view. In his captivating one-man-show-cum-standup-special The New One (2019), which chronicles his reluctant journey to fatherhood, Mike Birbiglia does not share his more competent wife’s enthusiasm about having children, but his disinterest is so specific and self-critical that the special mostly works—except when he occasionally makes pronouncements about women being inherently superior to men.

In his new standup special, Jackie, Rob Delaney presents a textbook case of SWMCS. Delaney, who came to public prominence first via his enormously popular Twitter account, and later for his marvelous show Catastrophe, is a charismatic presence on stage. He tells stories about his family, life in Great Britain, and political issues near and dear to his heart. Delaney is a passionate activist for, among other causes, Bernie Sanders and the British National Health Service, and here he praises the NHS and lambasts the American health insurance system, Donald Trump, the British royal family. Much of the humor in Jackie has a distinctly British flavor—Delaney begins by describing a Channel 5 documentary series on “Dangers of the Victorian Home,” a joke unlikely to resonate deeply with viewers unfamiliar with British television programming—but he clearly knows that his audience is transatlantic, and makes sure to explain details of both British and American culture that his audiences on either side of the pond might not otherwise be able to follow. His stories about his children are particularly charming; the show’s high point comes when he describes his sons’ joy at the prospect of same-sex marriage.

Though Delaney is personable, and this special generally diverting, he is, unfortunately, less technically accomplished as a standup comedian than as a television writer and performer. His anecdotes are, for the most part, shorter than average, and as a result lack the narrative and linguistic complexity of many of the most accomplished standups working today. The special as a whole lacks a sense of thematic purpose. Standup does not demand absolute thematic unity: recent specials like The New One and Hannah Gadsby’s subversive Nanette (2018) are exceptions to the rule. But great specials typically have some underlying sense of thematic purpose: Internet darling John Mulaney, for instance, does not structure his specials as singular statements, but his work is typically underpinned by a sense of enduring fascination with the melancholy absurdity of childhood. The sense of a slightly deranged mind at work, returning obsessively to a particular idea, is one of the chief pleasures of watching standup comedy. As anyone who has seen his television show or read his Twitter feed knows, Delaney is intelligent and passionately interested in subjects including politics and family life, but although he touches on these in Jackie, his ideas never fully cohere.

If the special has an organizing principle, it is an irritating sense of retrograde gender politics wrapped up in faux-progressive packaging. Delaney’s wife, like the wives of all other men afflicted with SWMCS, is both responsible and uptight. According to Delaney, he apologizes to her constantly, and she has never—once!—apologized to him for anything. He uses her, rhetorically, to emphasize his own foolishness and hygienic deficiencies: She tells him to buy her a particular brand of eyeliner and is annoyed when he buys her the wrong kind (which is not, he assures us, her fault, but his); she is alarmed by the miserable state of his fraying boxers, which create the illusion that he is bleeding from the crotch; she correctly recognizes his weight gain when he has failed to notice it. These anecdotes are hardly the stuff of nightmares or gross misogyny; Delaney clearly loves his wife. But so do all the other male comedians who cannot help talking about their wives in a similar way.

Women as Delaney describes them are fetish objects: worthy of worship but also frightening and unknowable.

When telling a story about looking up videos of home births on YouTube to prepare his older sons for the birth of their younger brother, Delaney remarks that of course all the women in these videos are incredible, because all women who give birth are incredible, unlike many of their male partners. But he also imagines a device that women could wear on their foreheads, adorned with little lightbulbs, that would indicate how nice you (the “you” here is clearly a man) have to be to that woman at any particular time. Women as Delaney describes them are fetish objects: worthy of worship but also frightening and unknowable.

Watching lesbian comedians like Gadsby and Tig Notaro discuss their experience of the world emphasizes the retrograde attitude of even theoretically progressive straight men like Delaney. Positioning women as inherently superior to men, as Delaney and Birbiglia do, denies our human complexity and messiness. Gadsby’s emphatic argument near the end of Nanette that women are not better than men, but have simply had less access to power, is refreshing. And the difference between the stories these men tell about their wives and those Notaro tells about hers is stark. In her recent special Happy to Be Here (2018), Notaro is occasionally baffled by her wife’s strange behavior, but she never presents those behaviors as inevitable feminine mysteries. She is simply a person telling a story about another person to make other people laugh.

Jackie ends with a truncated, awkward story about Delaney and his wife meeting Bill Cosby, “a prolific American rapist,” many years ago, before news of Cosby’s extensive history of sexual assault was widely known. Cosby hit on Delaney’s wife, who was breastfeeding at the time, and told Delaney that her breasts would shrink after she finished breastfeeding. Needless to say, the couple found him creepy. Delaney’s joke, and in particular its concluding line—“Joke’s on Bill Cosby, because my wife’s tits are still banging, and he’s gonna die in prison”—elegantly sums up the special’s self-contradictory outlook. Delaney means well, and he has progressive opinions about important issues. But he tells the story despite the fact that he doesn’t have anything deep to say about Cosby’s history of sexual violence, and in the end, he reduces his wife to a joke about her tits.