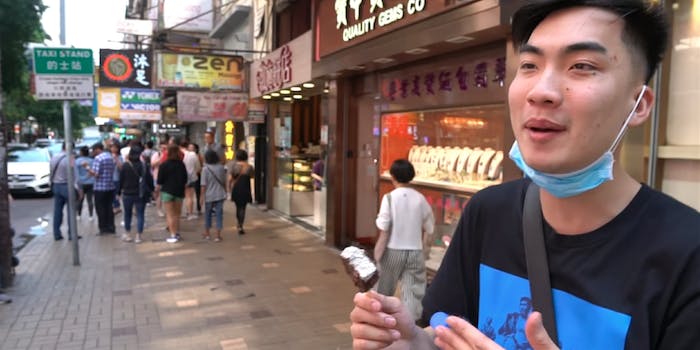 The controversial vlogger says he was just 'joking around.'

If you’ve heard of the YouTuber RiceGum, it might be because he’s especially talented at doing things to outrage people. He’s feuded with Bhad Bhabie for clicks, made jokes about rape survivors, and produced videos with titles like “Can I Eat Your Booty?” So a stunt from earlier this month feels on brand, but it also steps over a line and into blatant disrespect for Chinese culture—and people are letting him know.

RiceGum, aka Bryan Le, recently took a trip to Hong Kong, where he and a friend took to the streets to gain some knowledge and insight about the city. Just kidding! They insult the food in a restaurant window, asking if it’s dog, then ask someone working for UNICEF where the “hoes” and “bitches” are located.

Le says he was inspired to visit China from commenters telling him to “go back to China.” But rather than making a deeper point about racist comments, he asks people on the street if they’ve heard of him and gets mad when they haven’t.

Then his friend fondles some mannequins, and Le asks more people where he can find dog to eat. As the Hong Kong-based website Coconuts points out, they even use the Japanese flag to signal that they’ve touched down in China. It’s not clear if that’s a joke.

Commenters called out Le for his ignorance, and some compared him to Logan Paul, a vlogger who made a disrespectful video in Japan earlier this year. “This is not cool or funny at all,” said one critic. “You don’t show respect to the people and the country you’re not even from and you even had the guts to make fun of them not knowing English?”

Of course, Le turned the outrage from his trip into clicks. A new video titled “Why Everyone in China Hates Me…” already has more than 1 million views. Le says he was just “joking around.”