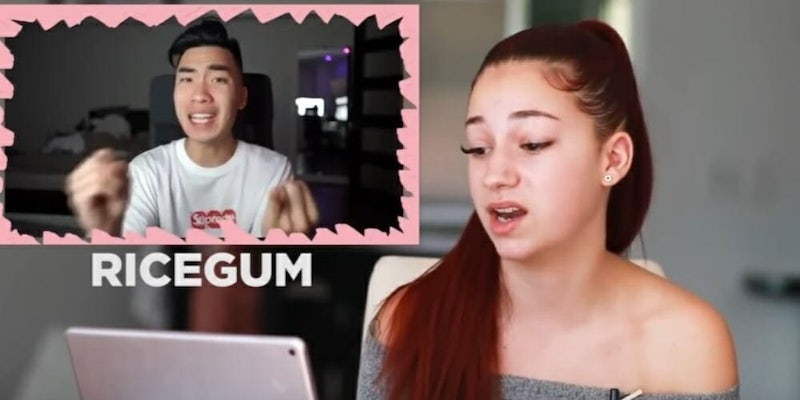 The feud between YouTube star RiceGum and 14-year-old internet sensation Danielle Bregoli is getting nasty.

The two have battled each other on YouTube since last year with reaction videos and reaction-to-the-reaction videos as RiceGum has blasted the musical stylings of Bregoli—the Daily Dot’s internet person of the year who’s known as Bhad Bhabie. At the same time, Bhad Bhabie has flung insults at RiceGum for the past several months.

Now, Ricegum has released a diss track toward Bhad Bhabie, and the acrimony is flying all over the internet.

But first, for the sake of context, let’s take a look back at the RiceGum vs. Bhad Bhabie feud that’s simmered for months.

The beef really took off last September when RiceGum (9.6 million YouTube subscribers) dissected Bhad Bhabie’s “These Heaux” video. He called her “Danielle Broccoli,” and he said her voice was annoying. More than anything, he said he was confused with the video and why she seemingly attacked him for being broke. He also wondered why Dr. Phil wasn’t given a shout-out since RiceGum said he made Bhad Bhabie’s career.

She immediately responded by calling him an asshole, “Ricedumb,” and “Ricebum.” She went on to opine that his face reminded her of a toenail and that he looks like the Asian Napoleon Dynamite.

If this were a boxing match, you’d probably have to give the first round to Bregoli (3.6 million subscribers).

In December, RiceGum tried again, but this time he couldn’t help but be impressed with Bhad Bhabi’s hook in “I Got It.” In his reaction video, RiceGum exclaimed, “Wow, actually wow. I wasn’t expecting that. I was expecting rubbish and she came through. That was decent.” He also asked Bhad Bhabie’s fans to stop calling him a toenail.

In response to that, Bhad Bhabie called RiceGum a “dusty-ass cockroach bitch.”

If RiceGum was trying to play nice, Bhad Bhabie made clear she wasn’t interested in a truce. Round 2 went to Bregolli, as well.

As for round 3, well, it seems like nobody wins.

Last month, Bhad Bhabie, after watching RiceGum’s Christmas music video, accused him of destroying Christmas, her “love for midgets,” and “my mom’s dog.” In response, RiceGum released two videos, in which he slut-shamed Bhad Bhabi and called her a “rat-looking girl” who doesn’t have any money.

RiceGum responded her by creating a diss track about how she’s an ugly 14-year-old girl who sleeps around and how she’s basically an internet meme come to life.

In an interview with YouTuber No Jumper this week, she was told that she had talked plenty of trash to RiceGum. Responded Bhad Bhabie: “So? I’m allowed to do that. You’re not. These bitches have to understand: We’re not equal.”

RiceGum first blasted Bregoli last July when he and his fellow YouTuber Jacob Sartorius reacted to a video of Bhad Bhabie making fun of Sartorious. As RiceGum said at the time, he used to have an issue with Sartorius until he asked himself this question: “Why am I beefing with a 13-year-old?”

Bhad Bhabie is 14, and, in all honesty, winning the verbal battle. As she said in one of her videos, “You’re 20 years old. And you’re going to come for me?”

That, as of this writing, is where the feud stands. And hopefully, that is where it ends.