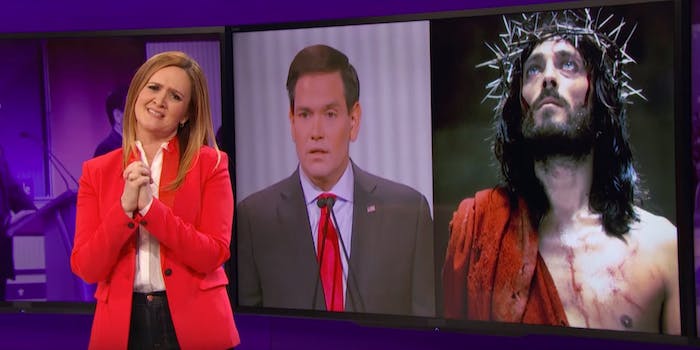 Full Frontal with Samantha Bee, the weekly half-hour show from former Daily Show correspondent Samantha Bee, doesn’t premiere until Monday night, but she’s already giving us an idea of what to expect with an old-fashioned takedown of last week’s GOP debate.

Bee didn’t want to fall into the trap of discussing Donald Trump at a debate he didn’t even attend, so she took her arsenal of comments to the candidates on the stage. As she demonstrated, there’s a lot to say about the robot, Uncle Rosco, and “whiny little turd” Ted Cruz.

It still might feel like 1992 for her, between the Bush and Clinton matchup and talk about the First Gulf War, but there’s a whole new crop of candidates for the taking—and mocking.

And if this is how she takes on Iowa, we can’t wait to see what happens with New Hampshire.