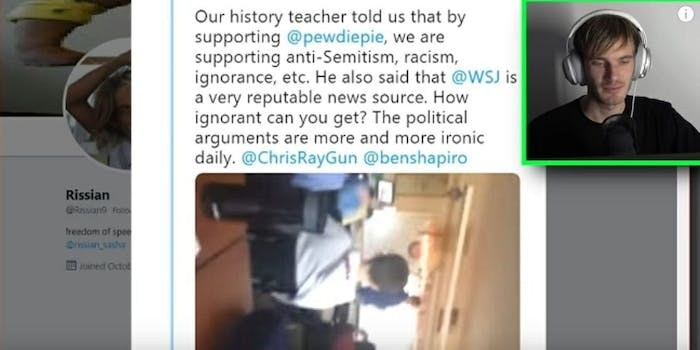 The teacher said promoting PewDiePie was akin to promoting genocide.

A rant by an apparent high school teacher calling out the world’s most popular YouTube star for ignorance and racism went viral last week. Now, PewDiePie has weighed in on the video—and he’s calling the teacher’s views “complete dogshit.”

“Blows my mind that a teacher speaking as a voice of authority over kids in this very strict tone, things are plainly not true,” the YouTuber with 77 million subscribers said. “It really shows you the effect of [negative news coverage] … Where did he get these crazy ideas? … It is kind of disturbing.”

The original Twitter video, apparently shot surreptitiously at a high school, was tweeted by @rissia9, who opened his account in October. In the video, the teacher blasted PewDiePie, who has used racist slurs in his live streams and who had uploaded nine videos in which there was anti-Semitic imagery (He also recently was skewered for promoting a smaller YouTube channel that also promoted anti-Semitic and Nazi imagery).

Our history teacher told us that by supporting @pewdiepie, we are supporting anti-Semitism, racism, ignorance, etc. He also said that @WSJ is a very reputable news source. How ignorant can you get? The political arguments are more and more ironic daily. @ChrisRayGun @benshapiro pic.twitter.com/qg6BtrOhek

As the teacher said in the video that’s been viewed more than 2.1 million times, “Every time you retweet one of these things or every time you promote this idea, you’re promoting ignorance, racism, genocide, ant-Semitism. These are all things you’re putting forward when you’re doing anything that promotes PewDiePie. Be careful about this.”

The tweeter obviously didn’t believe what the teacher said in his warning not to retweet or promote PewDiePie, writing on Twitter, “How ignorant can you get? The political arguments are more and more ironic daily.”

On Tuesday, PewDiePie called the teacher a “dumbass” on Twitter.

That message has been retweeted more than 96,000 times.

On Thursday, PewDiePie discussed the video on his channel.

A sarcastic PewDiePie said, “That’s right, everybody. If you ever promote PewDiePie, you are promoting genocide. … Be very aware that this is complete dogshit.”

PewDiePie certainly isn’t shy about blasting those with whom he disagrees. He recently called YouTube star Lilly Singh an “idiot” for complaining about the Forbes top YouTube earners list, and in May, he called some female Twitch streamers “stupid Twitch thots.”