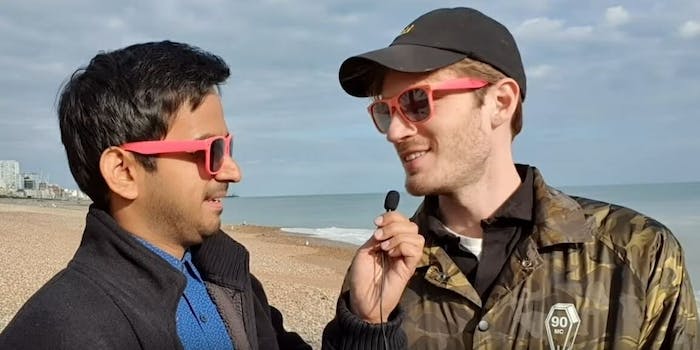 The Indian YouTuber who helped lead the “Subscribe to PewDiePie” movement and then who demanded the YouTube superstar meet him at a beach in England finally got his wish. And when the meeting occurred, Saiman Says didn’t really know what to do with his online idol.

So, the two of them passed the time by eating Indian snacks.

Saiman Says, who has more than 220,000 YouTube subscribers, was an ardent supporter of PewDiePie during his months-long battle with Bollywood music channel T-Series to be the most popular YouTube channel.

After PewDiePie conceded the race, Saiman Says traveled from India to England, camped out on the same beach where PewDiePie recorded the video for his mega-popular “Bitch Lasagna” track, said he would feed PewDiePie snacks from India, and politely demanded that PewDiePie meet him.

In the video, PewDiePie said that to meet him, all you have to do is call him out on YouTube (in Saiman Says’ case, his video begging for a meetup with PewDiePie was viewed more than 250,000 times). The problem, Saiman Says remarked, was that “I never thought this would happen, so I don’t have anything in mind.” PewDiePie responded by saying, “You said you would have snacks for me. That’s why I’m here. I’m only here for the snacks.”

So, the two then chowed down on Indian favorites like bhel, khakra, and Jeera soda. For the most part, PewDiePie enjoyed the unfamiliar flavors, but at one point, he said, “It kind of feels like I’ve been invited by my grandma, and she’s giving me all these weird snacks.”

Yes, some of the video was awkward and stilted—which was probably the point. But now that PewDiePie’s feud with T-Series is finished (as far as we know) and assuming PewDiePie wants to ingratiate himself with India—which has banned two of PewDiePie’s songs for lyrics that are “abusive, vulgar and also racist in nature”—collaborating with Saiman Says for a silly video isn’t a bad way to do it.