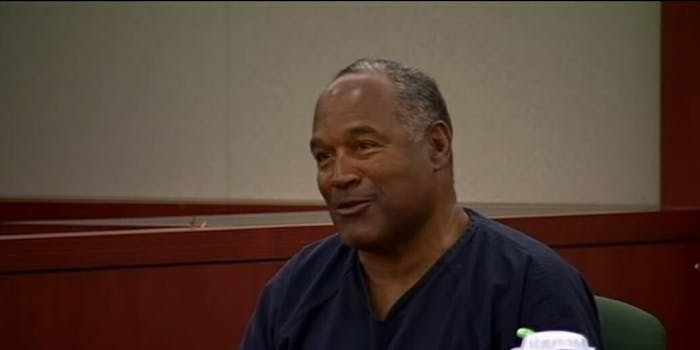 O.J. Simpson says in Twitter video that he never slept with Kris Jenner

The Juice wants to discuss his past sex life.

O.J. Simpson joined Twitter on Friday, and he’s had plenty to say since then, including about his sex life in the 1990s.

Simpson tweeted a video on Sunday in which he said that he never had a romantic relationship with Kris Jenner and that Khloe Kardashian is not his daughter.

That statement apparently was in response to Norman Pardo, who claimed to be Simpson’s former manager and who told Page Six last month that Simpson and Jenner had a one-night stand in the early 1990s that damaged both of their marriages.

Bizarrely, Simpson announced his presence on Twitter on Friday night, and many commenters have become disgusted that the man infamously accused and acquitted of murdering his ex-wife and her friend 25 years ago has become a social media star.

That hasn’t stopped Simpson from compiling more than 640,000 Twitter followers in a three-day span, and many of them are relitigating the 1995 Simpson murder trial that drew the attention of the nation after Simpson’s ex-wife Nicole Brown Simpson and her friend Ronald Goldman were stabbed to death.

Simpson isn’t talking about their deaths or his murder trial. Instead, Simpson, who recently served nine years in prison for kidnapping and armed robbery, is talking about sexual relationships.

Since then, Simpson has uploaded two Twitter videos in which he said he’s excited to “challenge that BS” and “set the record straight” about people who have said whatever they’ve wanted about him with “no accountability.”

Thanks to all my new followers. Love learning how to use Twitter. pic.twitter.com/J4JnN59yKl

In a second video posted on Sunday, Simpson talked about his relationship with Robert Kardashian (one of his lawyers during the 1995 murder trial); Jenner; and Khloe Kardashian, who was born in 1984.

“Bob Kardashian, he was like a brother to me. He was a great guy,” Simpson said. “He met and married Kris, and they really had a terrific time together when they were together. Unfortunately, that ended. But never, and I want to stress never in any way shape or form, had I ever had any interest in Kris, romantically or sexually. I never got any indication that she had any interest in me. All of these stories are bogus, bad, tasteless. … The simple facts of the matter is that [Khloe] is not mine.”

The first thing I want to set straight is this story Pardo (who was not my manger) is talking about all over the media regarding me & @KrisJenner pic.twitter.com/tZ9EJd4qxF

Last month, Pardo told Page Six that Simpson had bragged to him about having sex with Jenner in a hot tub when Simpson, Nicole Brown Simpson, Jenner, and Robert Kardashian were on vacation together.

Pardo said, “O.J. said he stood up, pulled his shorts down and … he said, ‘Her eyes bugged out of her head and I fucked that B until I broke her.’”

As of this writing, Simpson’s three Twitter videos have received more than 19 million views, nearly 56,000 retweets, and 240,000 likes.

As Simpson said in his first Twitter post, “I’ve got a little getting even to do.” Apparently, that includes discussing his sexual history from nearly 30 years ago.