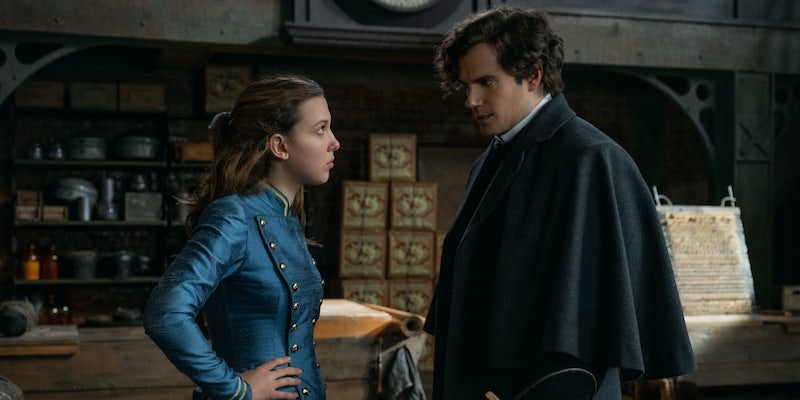 Netflix’s ‘Enola Holmes’ sequel has franchising on its mind

In the film, Enola is hired to locate a missing factory worker.

In a year when most of our movie viewing took place at home, Enola Holmes was one of 2020’s more unexpected delights: Based on Nancy Springer’s YA series, Millie Bobby Brown starred as the teenage sleuth (and youngest Holmes sibling) who had to escape both sexist Victorian-era standards and the shadow of her much more famous brother Sherlock (Henry Cavill) to solve her first case and make a name for herself. Two years later, a sequel is finally upon us. (According to Netflix, Enola Holmes 2 was the most-viewed film of the week with 64.08 million hours viewed since its debut on Friday.)

Enola Holmes 2 isn’t based on one of Springer’s books but rather real-life English history: With the backdrop of the Matchgirls Strike of 1888 (and one of its leaders) serving as inspiration, Enola—now a struggling detective who is once again fighting against the restrictiveness of Victorian London and Sherlock’s notoriety far eclipsing hers—is hired to locate a missing factory worker by her younger sister.

Many of the touchstones that made Enola Holmes charming and occasionally grating, from the witty banter of a Jack Thorne script and the flashes to the myriad of radical lessons Enola’s mother (Helena Bonham-Carter) bestowed upon her to Enola’s frequent fourth-wall cutaways that director Harry Bradbeer first depicted in Fleabag, are all back in full swing. Enola Holmes 2 is much more confident this time around and allows Brown and Cavill to expand upon the film’s sibling dynamic even more as their respective cases become entangled, and it allows the budding romance between Enola and the young viscount (whose case played out during the first film) grow.

Even as Enola fights to be known as a famous detective in her own right, Enola Holmes 2 is occasionally bogged down by potential teases and reminders of what Sherlock Holmes’ illustrious history on the page offers. On more than one occasion, characters who originated in Sir Arthur Conan Doyle’s novels show up—some more prominently than others—and serve to remind us that, even on a smaller scale, movies can’t just exist on their own. They also have to set up the next movie or two. But Enola Holmes 2 is charming enough that it’s more of a minor annoyance than a glaring mark against it.

Netflix doesn’t have the kind of franchise IPs under its umbrella like many of its competitors do. Enola Holmes has an amenable enough premise that it could be another big franchise in its own right as long as Brown and Cavill want to keep making them. Plus, it comes without the grossness of mining and exploiting serial killer victims and retraumatizing their families for Content™.