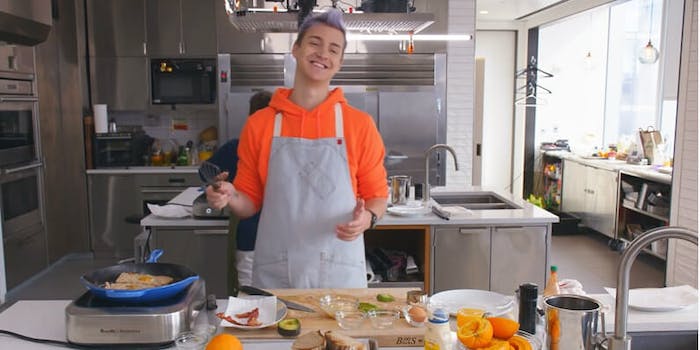 Ninja mocked for not knowing how to make a sandwich

He couldn't even slice the bread.

Tyler “Ninja” Blevins struggled to make a sandwich on the latest episode of Back to Back Chef, leaving fans perplexed.

On each episode of the YouTube original, a professional chef challenges an amateur cook to recreate a meal with no visual aid and only verbal instruction.

Ninja’s biggest challenge was using a knife. His lack of skill showed early in the competition when he was confused by how to cut slices of bread from a whole loaf. Making matters worse, he claimed to have had three years of restaurant “cooking”  experience.

Lalli Music became exasperated by trying to explain the bread slicing process and all of Twitter shared her pain.

“Carla from Bon Appetit trying to figure out how to walk Ninja through merely *slicing bread* is the greatest thing I may have witnessed this year,” Twitter user @llyonMTG wrote, along with a meme-worthy snapshot of the moment.

Carla from Bon Appetit trying to figure out how to walk Ninja through merely *slicing bread* is the greatest thing I may have witnessed this year. pic.twitter.com/9i1EbJhvYb

Some fans even lost a bit of respect for the 28-year-old video gaming guru.

“I uhhh am watching Ninja for the first time, only because he’s on Bon Appetit. I’ve never seen someone so inept at cooking, or wanted someone to shut up so badly,” Twitter user @hacksawjenny wrote.

i just watched 28 year old tyler "ninja" blevins struggle to figure out how to cut two slices of bread out of a loaf pic.twitter.com/4TJm1BOR6o

Eventually, Ninja was able to awkwardly cut two misshapen slices of bread, but unfortunately, the embarrassment continued when he was then asked to cut an avocado.

He went on to slice the avocado straight down the middle and through the pit several times.

“I would serve these avocado slices in a salad,” he says after scooping the avocado out instead of peeling as instructed.

Despite his many mishaps, the sandwich was eventually complete, and the finished product looked surprisingly edible.