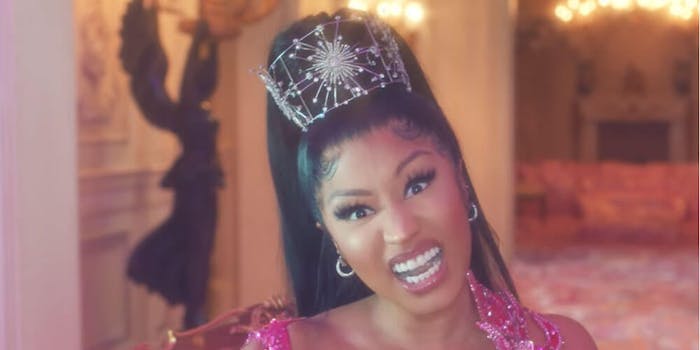 Nicki Minaj is pushing back against Instagram as the social media platform prepares to begin hiding likes in the U.S. next week.

Minaj stated in a tweet on Saturday that she would stop using Instagram in response to the company’s decision.

“I’m not posting on IG after this week cuz they removing the likes,” the artist said. “Hmmmm what should I get into now? Think of all the time I’ll have with my new life.”

I’m not posting on IG after this week cuz they removing the likes. Hmmmm what should I get into now? Think of all the time I’ll have with my new life

Instagram first began experimenting with removing likes in April for users in Canada. Since then, the test has been expanded to six other countries including Australia, Brazil, Ireland, Italy, Japan, and New Zealand.

The Facebook-owned app previously stated that it wants to see how users react when more emphasis is placed on content as opposed to how many likes a post receives.

“We are testing this because we want your followers to focus on the photos and videos you share, not how many likes they get,” a company spokesperson said.

Although next week’s test will only be applied to a small portion of Instagram’s U.S. userbase, Minaj argued that the move could cause significant damage to influencers. The rap star also appeared to accuse record labels of working with Instagram in an attempt to retain control over a music industry increasingly dominated by independent artists.

Cardi argued that instead of removing likes, the social media site should instead focus on the comment section.

“If anything is affecting Instagram right now, it’s the way the comments have been done or have been changing these past few years,” she said in an Instagram video. “I feel people been sayin’ the most weirdest shit, been starting the craziest arguments, been starting to race bait … because they want to get to the top, they want to get the most reactions. And that’s what I feel: The comments affect more than the likes.”

Instagram has repeatedly stressed that it hasn’t made a decision on whether the removal of likes will become a permanent addition to the app.

The company has also attempted to reassure influencers, who fear that brands will no longer be able to rate their popularity without likes.

“We understand that this is important for many creators, and while this test is in exploratory stages, we are thinking through ways for them to communicate value to their brand partners,” a spokesperson previously said.