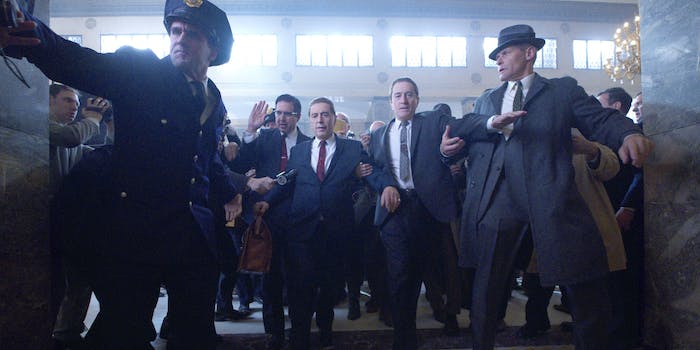 Netflix’s first trailer for its big splashy Oscar movie, The Irishman, is here, and it’s ready to immerse us right in the middle of the mob.

The Irishman follows the life of Frank Sheeran (Robert De Niro), a war veteran and a hitman for the mob, over several decades, which includes his dealings with mob boss Russell Bufalino (Joe Pesci) and the disappearance of Jimmy Hoffa (Al Pacino) in 1975. Directed by Martin Scorsese, the director behind Goodfellas and Casino, the trailer already sucks you in with the potential to become one of cinema’s essential crime films. The cast for The Irishman is so stacked that Netflix doesn’t even list the fourth Oscar winner among its named cast—Anna Paquin, who’s playing De Niro’s daughter Peggy as an adult in the film and does appear in the trailer.

It also employs extensive de-aging technology to make De Niro, Pesci, and Pacino look several decades younger so they can play their characters throughout the film. The CGI could easily make or break The Irishman depending on how effective it is in the finished product; with a reported budget of between $140-$175 million (in large part because of said de-aging visual effects), it’s Scorsese’s most expensive film to date.

Even though we’re nearly two months out from The Irishman’s premiere, the Oscar narrative for Netflix’s hopeful is already there. It’s Scorsese’s first full feature film since releasing The Silence in 2016; he also directed the pseudo-documentary Rolling Thunder Revue, which was released on Netflix in June. The film lured Joe Pesci, who largely retired from acting in 1999, into a major role. It’s the first time Scorses directed Pacino, and the film unites three actors who are already mob movie staples for the biggest one yet.

It’s also about as far as you can get from Roma, Alfonso Cuarón’s deeply personal, Spanish-language, black-and-white period film that Netflix banked on getting the streaming giant’s first best picture Academy Award. (Roma ultimately won three Oscars—all of them going to Cuarón—but lost the best picture to Green Book.) The throughline between the two films is in their directors, who are both widely established and respected Oscar winners.

The Irishman will premiere at the New York Film Festival on Sept. 27 and will be released in theaters and on Netflix later this fall.