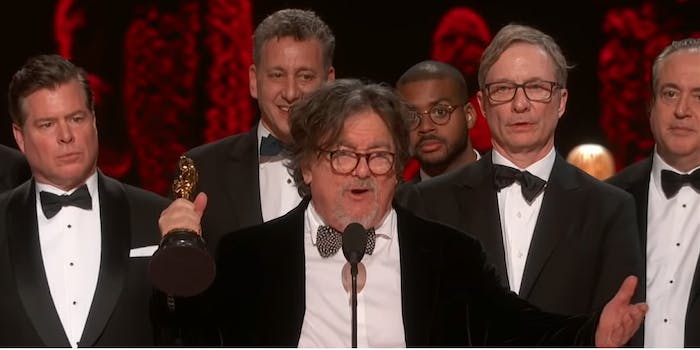 Green Book won Best Picture on Sunday and brought an otherwise uplifting Academy Awards to an underwhelming end. (And upset Spike Lee.) It also marked an end to a curious PR campaign for the film, which endured a few controversies on its road to the Oscars, the latest of which includes an aggressive, condescending email from a producer.

Writer Jenni Miller posted the email she received from Charles Wessler, one of Green Book‘s producers, in late January. Miller says the email was in response to a November review she wrote for NBC, which was critical of the film’s narrative about race.

In the email, Wessler states that “Green Book is the furthest thing from a racist movie” and that “African Americans for the most part LOVE this film.” He also corrects her on the name of Viggo Mortensen’s character Tony Lip, stating that his “name is Tony NOT Frank,” though Frank is indeed his real name.

Later in the oddly capitalized email, he chastises Miller for apparently not knowing she has a “big ASS responsibility to write the TRUTH when you write for NBC.”

here’s the email I received about Green Book from one of the producers. I censored the name of the editor he cc’d, which I guess was supposed to be a power move? anyone who has received something similar, feel free to reach out. pic.twitter.com/LIiV4CEp3Z

After Miller posted her email, other writers tweeted about similar interactions, either with Wessler or other people involved with the film. The Daily Dot reached out to Miller to see if she’s received any other responses.

Besides the problematic framing of the film and criticism from Dr. Donald Shirley’s family over his depiction, it was re-revealed last month that director Peter Farrelly often exposed himself on sets in the ’90s, and screenwriter Nick Vallelonga tweeted out anti-Muslim sentiment to Donald Trump in 2015. There were rumors that these revelations were part of a smear campaign.

The tone of Wessler’s email can be seen elsewhere, though: When an Oscar voter in his fifties was asked about Green Book for the New York Times, he “admitted that his support for Green Book was rooted in rage. He said he was tired of being told what movies to like and not like.”

Wessler, who had previously produced There’s Something About Mary and Shallow Hal, also caught heat last night for mentioning “great friend” Carrie Fisher at the very end of the acceptance speech, causing a flood of memes. Wessler worked as a production assistant on The Empire Strikes Back and Return of the Jedi.

Shirley was not mentioned in the acceptance speech.