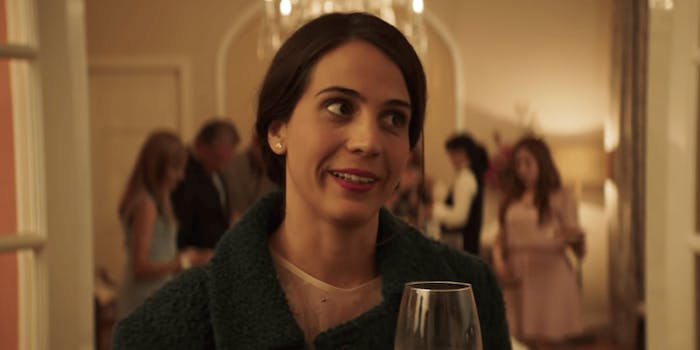 The Mexican rom-com explores the meaning of marriage in the modern era with biting wit and casual charm.

What is the role of marriage in the era of online dating?

This question gets asked over and over again in blog posts and “Modern Love” essays, but it hasn’t had many good cinematic answers.

There are a couple of reasons for this. The rom-com has become a lower-budget affair in recent years, and it seems that most studios’ efforts in the genre are fairly high-concept, like Long Shot or Isn’t It Romantic? Outside of studios, rom-coms have skewed younger. Netflix has made a slew of them recently, but films like To All the Boys I’ve Loved Before, Set It Up, and Tall Girl are geared toward a teenage audience.

Mexican rom-com Ready to Mingle (Solteras), released by Netflix on Wednesday, is at once a loving throwback and a modern update. Along with American film Plus One, the movie marks a mini-resurgence of a tried-and-true subgenre: A woman looks around and realizes that everyone she knows is getting married, and she’s going to do something about her own prospects.

RELEASE DATE: 10/2/2019
DIRECTOR: Luis Javier Henaine
STREAMING: Netflix
A single woman takes classes on how to find a husband after a breakup prompts her to reevaluate her life.

Ready To Mingle might be the best version of this type of story since Bridget Jones’s Diary. The sharp film addresses the absurdities and complexities of modern dating with wit and charm. A strong cast balances humor and heart while the script explores love and marriage in 2019.

Again, the story is fairly familiar. Ana (Cassandra Ciangherotti) is a mess. Her boyfriend left her for someone else. Her friends and family members are getting engaged. She responds by drinking too much, feeling sorry for herself, and generally making things worse.

After her cousin gets engaged, she reveals to Ana that she took classes on finding a husband. Ana hates the idea, but she feels like she is running out of options, so she decides to give it a shot.

The film works particularly well thanks to Ciangherotti, whom American audiences probably know best from Los Espookys. Here, she plays an equally sardonic but more lively character, similar to Aubrey Plaza but without the laconic detachment. Her acerbic wit recalls some of the best skeptical rom-com anti-heroines, such as Bridget Jones and Kristen Wiig’s Annie in Bridesmaids.

Ready to Mingle carefully thinks about how dating has changed in the late 2010s, and is always up for interrogating our current romantic moment. “We live in difficult times,” marriage guru Lucila (Gabriela de la Garza) tells her class before dishing out rules for dating in the online era. “Technology allows us to find a partner in one simple click. And with another we can get rid of them. They have more options to choose from nowadays, but so do we.”

A number of recent rom-coms have struggled to adapt genre cliches to the social media age. Ready to Mingle smartly uses the internet as a plot device. Facebook tells Ana all of her friends are getting married. Dating apps complicate her love life. One student in the class asks, “Isn’t that why we have the internet, so we don’t have to go out?”

The film also handles modern sexual mores with brash confidence. In one scene, the girls in the class learn how to start saying no to sex on the first date. “You won’t gain anything from having sex on the first date,” Lucila instructs them. “Except for some pleasure, but that’s what vibrators are for.”

Perhaps most importantly, Ready to Mingle strikes a deft balance in dramatizing Ana’s struggle while reveling in the absurdity of defining oneself by a romantic partner. Ana’s sister chides her after she joins the class: “There are many ways to make your life meaningful. Buy a dog like everybody else.”

Ready to Mingle isn’t a perfect film. Like many rom-coms, it struggles near the end of act two as the comedic momentum sags and the plot needs to launch toward an endgame. But the movie’s earnest charms and sardonic wit more than compensate for its flaws.

Sometimes, the key to a good rom-com isn’t reinventing the wheel, but carefully considering how the wheel could be updated for a newer, fresher model. Ready to Mingle pulls off the admirable feat of making a marriage rom-com for a generation that isn’t so sure about marriage, and it remains just as skeptical as we do.