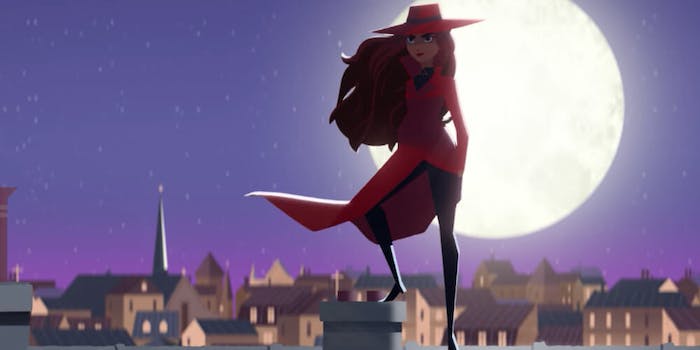 Raf Dla says he was paid below minimum wage.

With Carmen Sandiego’s second season on the horizon and the animated series recently snagging an Emmy nomination for Outstanding Children’s Program, the team behind the Netflix show seems to have a lot to celebrate.

Yet, one of the animators who worked on season 2 took the opportunity of its inching Oct. 1 debut to air out his behind-the-scenes grievances.

Raf de las Alas, who goes by Raf Dla and lives in Quezon City in the Philippines, worked on the show through Top Draw, a Filipino animation company that has worked in the animation department and production management of Carmen Sandiego. Dla alleges that Top Draw paid him below minimum wage, and when he asked for “proper compensation,” the company abruptly fired him. Top Draw allegedly said he was “disrupting the positive atmosphere of our company,” which it cited as grounds for his termination–even though he claims to have only let one person know of his grievances, the production manager, or who he describes as a “corporate bootlicker.”

“I never made a scene in spite of all they did, because I really wanted to work on this show. I really liked animating it, it’s something I was passionate about, but I couldn’t ignore the wrongs they were doing either,” Dla wrote on Facebook.

Dla, who studied animation for five years and worked in the industry for one, told the Daily Dot that even after his experience with Top Draw, he likely won’t be leaving the industry.

“I really love animation, but that also means I have to be critical toward the bad things the industry does,” Dla said. “If I stop that, nothing is going to happen, which is why I made the post in the first place, to remind my friends that these things are going on.” Dla said he also made the post to “blow off some steam” because “sometimes you just need that catharsis,” but he didn’t expect it to go viral.

Dla says Netflix is partially responsible for holding the companies it works with, like Top Draw, accountable for how they treat their employees. He says Netflix takes “the cheapest deal from a company that promises to get production done fast and cheap, with little regard for its creative workers” and that it prioritizes profit and pleasing shareholders over “the welfare of workers that drive these industries in the first place.”

Expecting Netflix to self regulate is what he calls a “pipe dream.”

“This isn’t a bug in the system, this is capitalism working as intended. Unfortunately, neoliberal policies and economics have given these companies free rein,” Dla said. “They’re not going to do anything about it unless their bottom line is threatened or stronger regulations are enforced.”

The Daily Dot has reached out to Top Draw several times as well as Netflix.

Through his post, Dla urged others who have been wronged by Top Draw to come forward, “so we can hopefully improve things and demand better.” “They got rid of me easily because I was alone, but as a collective, perhaps you could collectively bargain for better. We shouldn’t let this slide,” Dla wrote.

User @NegiKitsu reshared Dla’s post on Twitter, where it similarly went viral and asked for animators to share their own experiences of working in the Philippines.

“Top Draw attempted to lock my friends into a two-year ‘internship’ deal. Basically college students in two years of slavery. I honestly wonder why this company hasn’t been shut down yet,” Twitter user @karmidraws wrote.

Reminder that animators in the Philippines are badly treated and severely underpayed pic.twitter.com/C9TGjNu65e

Top Draw attempted to lock my friends into a two-year 'internship' deal. Basically college students in two years of slavery. I honestly wonder why this company hasn't been shut down yet. https://t.co/jQd5XgFu55

After years of service, one of my friends filed for resignation due to health problems. HR did nothing for a long time. Turns out they 'lost' her resignation letter and suddenly found it again when she followed up. https://t.co/jQd5XgFu55

“Top Draw exploited me and my friends. We were too overworked and many overtimes staying past 12am with no overtime pay,” they wrote. “Even tho our department position wasn’t for entry levels yet we get paid liked entry levels.”

The influx in responses @karmidraws is receiving highlights a larger problem than just Top Draw: Dla’s experience is an all too common one in the Filipino animation industry as a whole.

Dla says it doesn’t surprise him that people are coming forward with their own stories of abuses in the industry, which he said is both a “relief” and “heartbreaking.”

“Many of the stories are far worse than what I had to deal with, involving sexual abuse, bad working conditions, and a toxic work mentality,” Dla said. “On one hand, I’m afraid that these corporations are going to step in to silence us and nothing will change. … However, I also feel like we’re not alone anymore and there is hope. So I won’t shut up about this, and I encourage others to keep up the good fight.”

Twitter user @aschfahI claimed that they worked at an animation studio and only made 12 PHP–equivalent to 23 U.S. cents. “The only bonus I received working there was a burger,” they wrote.

Please when I started out my creative career here in PH i was being paid 9,000 php without benefits. https://t.co/mUm0PJeNXo

Dla thinks that many animators in the Philippines have previously refused to come forward with their own stories “out of fear of shaming, legal action, or having their reputation smeared” because the industry is “small” and everyone seems to know each other. “I just got sick and tired and decided to take the bullet for this one,” Dla said.

Story from someone who wants to be anonymous
Part 1 pic.twitter.com/gUhX0ycXtx

In the future, Dla hopes to see “genuine change” within the industry.

“I hope that with the huge discussion, we will organize as creatives, that a workers union for artists will rise out of this, or even a studio commonly owned by its artists–instead of a single, greedy executive at the top, who probably only knows how to count money,” Dla said. “We need to remember that we are the driving force of this industry.”