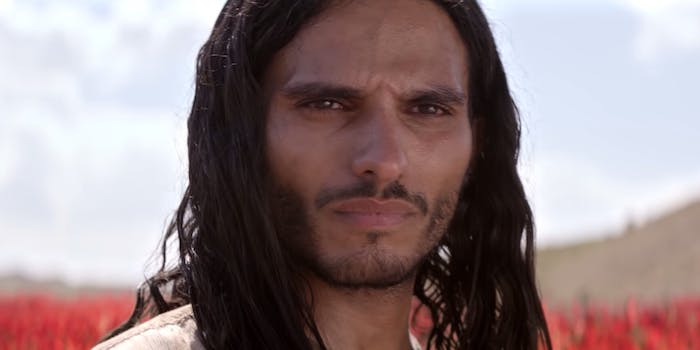 Did Muslims on Twitter already figure out the twist ending to Netflix’s ‘Messiah’?

The protagonist's name sure is telling.

Netflix’s latest media blitz has been for its upcoming series Messiah, which follows a CIA officer as she investigates “a charismatic figure whose followers believe that he can perform miracles.” The overarching question of the series appears to be in one of the show’s tags: “Will he convert you? Will he con you,” which appears mid-way through the trailer.

Unfortunately, thanks to an apparent gaffe from showrunners, people on Twitter may already know the answer. And the series isn’t even out yet.

Muslims on Twitter quickly jumped on the trailer, which appears to delve into a story from their faith. We’ve seen plenty of different films attempt to tackle Christianity, Judaism, and Catholicism, but it is a new trend among American media to examine the Muslim faith. Messiah appears to do just that, examining one of the religion’s most well-known stories. The story of God, his prophets, and… the anti-Christ?

A massive spoiler appears to be hidden in the protagonist’s name. The film’s titular actor, Mehdi Dehbi, will portray “Al-Masih.” It was a massive hint to anyone with a knowledge of Islamic eschatology. “Al-Masih ad-Dajjal” translates to “the false messiah, liar, the deceiver” in Arabic, strongly indicating that Messiah is, in fact, about the anti-Christ’s campaign to deceive the masses.

People were quick to point this out online. User @Sultaan_Mo1 shared their predictions with their Twitter followers and was reportedly blocked by both Netflix and Messiah‘s official Twitter accounts. In their thread, @Sultaan_Mo1 breaks down why they believe the show follows Dajjal.

“These lot been reading reports about the Dajjal and decided to make a profit from it,” they wrote.

@Sultaan_Mo1 even included a thread explaining the history and context of the story of the Dajjal.

《 The greatest fitnah (trial, tribulation) on the face of the earth since the creation of Adam until the onset of the Hour will be the fitnah of the Dajjaal, as the Prophet ﷺ said. Hence there is no Prophet from Nuh to Muhammad ﷺ who did not-

"At every gate there will be angels guarding it" [ al-Bukhari,1880; Muslim, 2449 ] he won't be able to enter Makkah as well. As far as other places are concerned, he will enter them one after another 》

@Sultaan_Mo1 was far from the only user to notice the apparently obvious spoiler. “Crying @ the fact that muslims figured out the twist ending of the netflix ‘messiah’ show b/c they LITERALLY NAMED THE CHARACTER DAJJAL,” one user wrote.

Will he convert you or con you?? It will be about a messiah (Imam Mahdi) who in the end will be the Antichrist (Dajjal)… and also lose an eye in the movie

And i remembered years ago one Ustaz i cant remember who but he ever said, "just wait and see. One day humans will even come up with a Dajjal movie"

And i remembered years ago one Ustaz i cant remember who but he ever said, "just wait and see. One day humans will even come up with a Dajjal movie"

crying @ the fact that muslims figured out the twist ending of the netflix 'messiah' show b/c they LITERALLY NAMED THE CHARACTER DAJJAL pic.twitter.com/nLWWtxpKHL

Based on the hype, Messiah will have a large and eager audience awaiting it when it’s released on Jan. 1, 2020—whether or not we know the twist ending.

Correction: The titular character is named “Al-Masih,” according to Netflix.