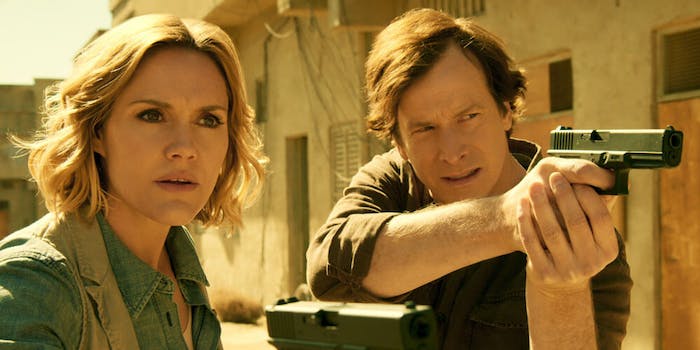 The demented minds that brought us Childrens Hospital (Rob Corddry and David Wain, along with Krister Johnson and Jonathan Stern) are back with Medical Police, a new comedy series now streaming on Netflix. A spinoff of the Adult Swim medical drama parody, Medical Police follows the characters of Dr. Lola Spratt (Erinn Hayes) and Dr. Owen Maestro (Rob Huebel) who unwittingly stumble upon a deadly virus and become recruited by the Centers for Disease Control and Prevention on a mission to essentially save the Earth’s population.

In the same vein as Childrens Hospital, Medical Police is grounded in absurdist comedy—with plenty of slapstick for good measure. Although in this case, the new half-hour format (which Corddry had previously eschewed for CH) really allows the series to branch off and become its own thing, while residing firmly in the same universe as its prototype.

To that point, Medical Police picks up right back in the titular Childrens Hospital (named after the fictional Dr. Arthur Childrens) in São Paulo, Brazil, where Lola is called on to treat university students exhibiting mysterious symptoms including an inexplicable neck rash. After running some tests, Lola goes rogue and sends her findings to the CDC, enlisting the help of her former flame and colleague Owen to try to seek out the source of the virus.

Before long, the pair encounter CDC secret agent Sloane McIntyre (Sarayu Blue), who recruits them to investigate another outbreak of the virus in Berlin, which is suspected to be bio-terrorism. They’re told they have 72 hours to locate the perpetrator and the cure, but things naturally go awry—as they tend to do—on the flight to Berlin, when a double agent jeopardizes the mission and attempts to take down the plane.

Lola and Owen soon find themselves mixed up in a vast conspiracy bigger than the both of them, as they travel the globe in sort of a Where in the World Is Carmen Sandiego meets international spy thriller, as they race to find out whoever is behind the coordinated outbreaks, while attempting to stop the evil mastermind.

Fans of Childrens Hospital will almost certainly appreciate the humor of Medical Police, although it’s certainly not required viewing for those uninitiated with the source material. While Childrens Hospital existed in five-minute webisodes—and eventually 15-minute episodes when it moved to Adult Swim—the half-hour format is a nice change and allows for more of a dedicated and cohesive plot, rather than of an amalgam of rapid-fire gags.

All 10 episodes of Medical Police are now streaming on Netflix as of today, Jan. 10.