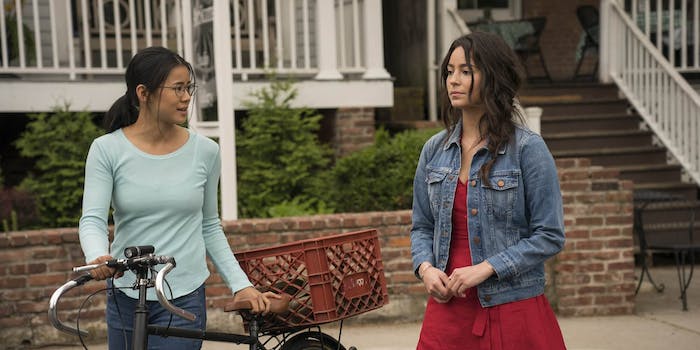 It's a retelling of 'Cyrano de Bergerac' with a queer, Asian-American heroine.

For the past couple of years, it’s felt like Netflix is singlehandedly resurrecting the rom-com genre. The latest offering is a queer teen love story called The Half of It, and it looks like a very welcome dose of classic romance tropes and relatable coming-of-age drama.

Written and directed by Alice Wu (Saving Face), it stars Leah Lewis as Ellie Chu, a quiet, academic girl who lives in a small rural town. She runs a business writing essays for her classmates, but she ends up turning her skills to a different kind of forgery: writing love letters on behalf of a clueless jock who can’t handle his crush on a girl at their school, Aster. The problem is, Ellie is in love with Aster herself, and thinks these letters are the only way to express her feelings.

It’s a retelling of the classic play Cyrano de Bergerac, and even if you’re not familiar with the original, you may remember this idea as the premise of another Netflix teen romcom, Sierra Burgess Is a Loser. The trope can easily fall into catfishing territory, but The Half of It looks wonderfully sincere, featuring an Asian-American protagonist who is just coming to terms with her feelings for another girl.

The Half of It arrives on Netflix on May 1.