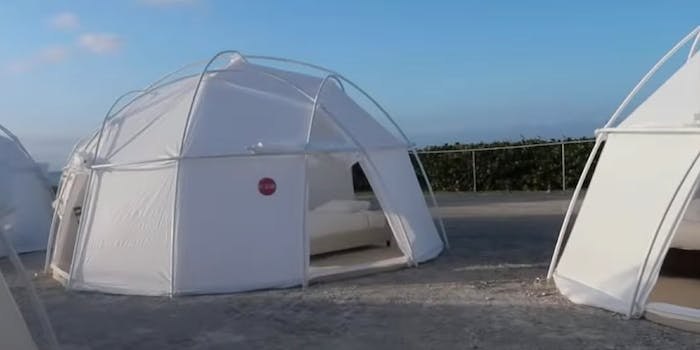 The Fyre continues to burn.

Remember Fyre Festival, the super-hyped 2017 event that turned out to be just a desolate island with poorly constructed tents, inadequate food, and a severe lack of plumbing?

Netflix announced on Monday that director Chris Smith is helming Fyre, a documentary about the disastrous scam, Complex reports. The film—a collaboration among Vice Studios, Jerry Media, and Library Films—is set for release on Jan. 18.

Get your exclusive first look at FYRE — a revealing new doc about the insanity and rapid unraveling of Fyre Festival: the greatest party that never happened. Premieres January 18. #NetflixNewsWeek pic.twitter.com/B4iaR3UJwM

I def want to see this!

The organizers of Fyre Festival had claimed it would be a luxurious music festival set in a tropical island paradise. The announcement video showed scenes of bikini-clad women splashing around the ocean while jamming out to big-name artists—but expectations far, far exceeded reality.

Meanwhile on Twitter, people reading about Fyre Festival’s fallout were largely unsympathetic to those who forked over huge sums of money for the disappointing event. Observers can’t wait to see it all unfold on film.

When a bunch of over privileged, unself reliant 20+ year olds went to a beautiful island and couldn’t figure out how to rough it and have a good time. Yes, it was criminal to not get what they paid for but the level of panic these people had was ridiculous.

I can't wait to not feel sorry

Billy McFarland, the mastermind behind the Fyre Festival chaos, was sentenced to six years in prison for defrauding investors of nearly $27.4 million.