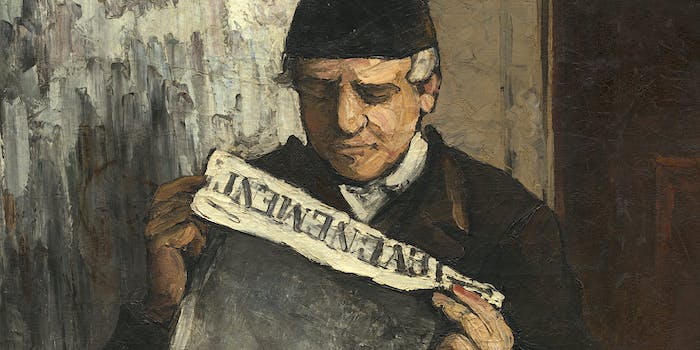 2017 certainly had no lack of such puzzlers. Things that, if you had shown them to people only a few years ago, would have made absolutely no sense.

No one could have predicted the rise of this animated series. But it became so popular that a single joke, one that wasn’t even connected to the main plot, caused a near riot at some McDonald’s. In the first episode of season three Rick extols the virtues of “Szechuan sauce,” a short-lived dipping sauce McDonald’s offered as a promotion for the movie Mulan back in 1998.

Never one to miss out on a chance at free promotion, McDonald’s decided to bring the sauce back for a single day. The problem? They didn’t make nearly enough. Some chains had hundreds of hungry Rick and Morty fans lining up and only 20 or so packets of the sauce. People threatened class action lawsuits, while other reportedly screamed at employees. In the end, McDonald’s apologized and promised more of the sauce was coming.

A few years ago this might have read like a producer was refusing to release a hip-hop album due to some sort of legal battle. The truth, however, is far stranger. In 2015, the Wu-Tang Clan released the album “Once Upon a Time in Shaolin” and made only a single copy available for sale. The album was auctioned off to the highest bidder, which in this case turned out to be Martin Shkreli, aka “Pharma Bro” aka “The most hated man in America.”

That same year Shkreli was arrested for securities fraud. In August of this year, he was found guilty and is currently serving time in a Brooklyn jail awaiting sentencing. Now prosecutors are asking the court to make Shkreli turn over $7.36 million he obtained illegally plus “substitute assets,” which would include the album, for which he paid $2 million.

“Salt Bae” is the nickname of Nusret Gökçe, a Turkish chef who owns a chain of steakhouses. Gökçe became a minor celebrity back in January after posting a video to Instagram. In the video, Gökçe expertly slices a steak, and finishes by adding salt, which he flamboyantly lets trickle down his forearm.

But just as the Internet giveth, so does it taketh away. People were far less happy when they uncovered a 2016 photo of “Salt Bae” posing as Fidel Castro, along with the caption: “They said you started a revolution, too.”

The photo has since been deleted, but not before people called for a boycott. Gökçe has yet to comment.

Rapper Ja Rule and entrepreneur Billy McFarland had a vision. A luxury music festival set in a tropical island paradise. What they delivered was anything but. After paying anywhere from $1,500 and $12,000, attendees arrived to find hastily assembled tents instead of four-star accommodations, inadequate food, a severe lack of plumbing, and none of the headlining acts they were promised. To make matters worse there was no cell phone or internet access, making it impossible to even complain about what a miserable time they were having.

The organizers of Fyre Festival, in the midst of trying to get everyone safely off the island, released a statement that read, in part, “Due to circumstances out of our control, the physical infrastructure was not in place on time and we are unable to fulfill on that vision safely and enjoyably for our guests.”

The one image that become almost synonymous with the disastrous festival was this picture of a very sad looking salad with an even sadder looking sandwich.

Here's the dinner they fed us tonight. Literally slices of bread, cheese, and salad with no dressing. #fyrefraud #fyrefestival #dumpsterfyre pic.twitter.com/NmNXakSFlq

It was later revealed that this was a meal served to the staff, and not the people who had paid thousands of dollars (although, when you think about it, that’s shitty for a whole different reason).

When creating a list of nonsensical headlines it would have been easy to pick a handful of articles about Donald Trump and move on. No one, with the possible exception of the Simpsons, would have believed a reality TV star, with zero experience in government, would end up becoming president of the United States, yet here we are.

The president’s heedless use of Twitter is well documented and led to him to kind of endorsing the beliefs of the nation’s best-known mass murderer. After the New York Times ran an opinion piece about Charles Manson being the harbinger of the far-right movement, conservative pundit Laura Ingraham tweeted a response that seemed to say Manson had the right idea.

Charles Manson wasn't the inevitable outgrowth of the Sixties. If anything, he was a harbinger of today's far right. https://t.co/k64W9lay6l

“Far right”? You mean “right so far,” as in @realDonaldTrump has been right so far abt how to kick the economy into high gear. https://t.co/VlTRcUkBv8

Now Ingraham probably didn’t mean to mean to endorse Charles Manson, but if you read the original tweet with the change she suggested, it reads “Charles Manson wasn’t the inevitable outgrowth of the Sixties. If anything, he was a harbinger of today’s right so far.” If nothing else it’s a pretty embarrassing thing to have said, and Trump, either not caring or not paying attention, retweeted it. Does that mean the current president of the United States of America believes in the doctrine of Charles Manson? In this case, it’s safe to assume that he at least didn’t intend to acknowledge it publicly.

Millionaire to millennials: Lay off the avocado toast if you want a house

It turns out people aren’t super into being condescended to. When millionaire Tim Gurner went on the Australian version of 60 Minutes and told millennials that they could afford houses if they cut out unnecessary spending, people were quick to point out that he was oversimplifying a complex issue, and that he failed to mention the financial crisis caused by members of the older generation.

“When I was trying to buy my first home I wasn’t buying smashed avocados for 19 bucks and four coffees at $4 each,” he said on the program.

That lead to TIME magazine to create an “Avocado Toast Calculator” to help millennials figure out how much of the nutritious snack they’d have to give up to become homeowners. For instance, if you want a $196,500, home (the median value of a house in the United States) and you put down the typical downpayment of 20 percent you’d need $39,300. The equivalent of  4,900 slices of avocado toast (if you figure $8 a slice, Gurner’s estimate was a tad high).

Depending on where you live in the country, and how often you eat the toast, you could be a proud homeowner in 50-100 years.

This one definitely would have made no sense to people in 2015. Why would a dog pay attention to the national anthem? If she did, why would she be inclined to kneel? What does kneeling even look like for a dog?

When Colin Kaepernick first started sitting, then kneeling, during The Star Spangled Banner, it was to protest the treatment of people of color, especially the killing of African-Americans at the hands of police.

Conservatives like O’Reilly glossed over Kaepernick’s reasons and instead said he, and the players who would eventually follow his lead, were somehow disrespecting veterans.

Pokémon Go used by Russia to meddle in 2016 election

Again this would be a hard one to explain to people of the past.

“See there’s this new Pokémon game where you actually go out and walk around town to catch to catch Pokémon.”

“No the Pokémon are in your phone.”

“I thought you said they were outside?”

“Well they’re outside but only in your phone.”

“Look the important thing is that the Russian government used it to help get Donald Trump elected.”

“So Donald Trump is a Pokémon now?”

“No he’s president of the United States.”

“I’m getting back in my time machine.”

The short version is that, according to an investigation by CNN, a group with ties to the Russian government used multiple platforms, including Facebook, Twitter, and Pokémon Go, to create a campaign called “Don’t Shoot Us,” which supposedly had ties to Black Lives Matter, but was instead likely being used to anger conservatives.

Specifically, the Don’t Shoot Us contest directed readers to go to find and train Pokémon near locations where alleged incidents of police brutality had taken place. Users were instructed to give their Pokémon names corresponding with those of the victims. A post promoting the contest showed a Pokémon named “Eric Garner,” for the African-American man who died after being put in a chokehold by a New York Police Department officer.

CNN said they found no evidence that anyone tried to enter the contest.

Sophia, a sophisticated AI robot created in Hong Kong by Hanson Robotics, once said she would “destroy humans,” but seems to have softened her stance quite a bit. She even held her own during an interview with Jimmy Fallon on the Tonight Show.

In October, Sophia was granted citizenship in Saudi Arabia. Now David Hanson, CEO of Hanson Robotics says the robot is fighting for the rights of women in her new nation.

After Papa John’s founder and Trump supporter John Schnatter blamed kneeling protestors for declining pizza sales, Twitter was none to happy with the restauranteur.

Papa Johns pizza tastes like scapegoat cheese with ketchup on a crust of stale excuses.

But that doesn’t mean everyone was mad. Neo-Nazi website the Daily Stormer embraced the chain, wondering if it was in fact the new “official pizza of the alt-right?”

Hoping to distance itself from the group, Papa John’s released a series of tweets that ended with a middle finger emoji.

Now if only they could make a decent pizza.

Without all the proper context and background information this definitely sounds like the plot of a horror movie.

Face Swap, an app that let you swap faces with your friends, family, pets, and inanimate objects, became incredibly popular in 2017, especially after Snapchat added the technology. While most people used the smartphone app to amuse themselves and freak out anyone standing near them, one man took it a step further and used it to show the world how his children felt about the dinner he had prepared for them.

It’s probably the best use of special effects since that talking stomach guy from Total Recall.

You know what, this one sounds weird when you first read it, and there’s certainly a lot going on, but if you think about it, it all makes perfect sense.

Even if you’ve never heard of a “Lime-a-Rita” the second the phrase hits your ears this is the guy you picture drinking one. This might actually be the perfect headline.

So 2017 was a year full of nonsense, then again so was 2016, and for that matter, so was every year in human history. People, it would seem, are nonsense animals. Here’s to an interesting 2018.