Catering to the Downton Abbey audience, The Crown shares both Downton‘s strengths and its pitfalls: gorgeous production design and costumes, coupled with a nostalgic desire to ignore the inequality that made all this luxury possible.

Projected to last six seasons, The Crown follows Queen Elizabeth II’s life from her marriage in 1947 to the present day. Showrunner Peter Morgan (writer of numerous films and movies including The Queen, starring Helen Mirren) decided to skip Elizabeth’s earlier years, which has the unfortunate effect of introducing her as a rather passive character.

Like many British women, Elizabeth (Claire Foy) enjoyed greater personal freedom during wartime, serving in the Auxiliary Territorial Service. Yet in the first few episodes, we only hear about this backstory in passing, when she briefly uses her training as a car mechanic. Likewise, the show skips over her courtship with Prince Philip (Doctor Who‘s Matt Smith, very well cast), a controversial love match that Elizabeth personally campaigned for against the wishes of her family.

The cast of politicians and aristocrats are handled well by a stellar team of character actors including the acclaimed Eileen Atkins (Queen Mary) and John Lithgow (Winston Churchill), but the show still paints an overly rosy view of the royal family life. Prince Philip is characterized as a doting, hands-on father (an unlikely role for any upper-class man in the ’50s, never mind Philip himself), and in a more general sense, we’re given a totally one-sided view of British colonialism. An early turning point sees Elizabeth and Philip’s picturesque vacation in Kenya cut short by her father’s death, precipitating a protracted scene of grief among her British and Kenyan subjects. Meanwhile, in the real world, British forces would shortly embark on a bloody campaign to suppress Kenyan rebels, using methods that were later compared to Nazi concentration camps.

No one expects The Crown to be a hard-hitting political drama, but it would’ve been nice to see a more nuanced view of monarchy as an institution. Is it too revolutionary to ask for fewer heartwarming scenes where adorable children give presents to kings and queens, and then everyone applauds? 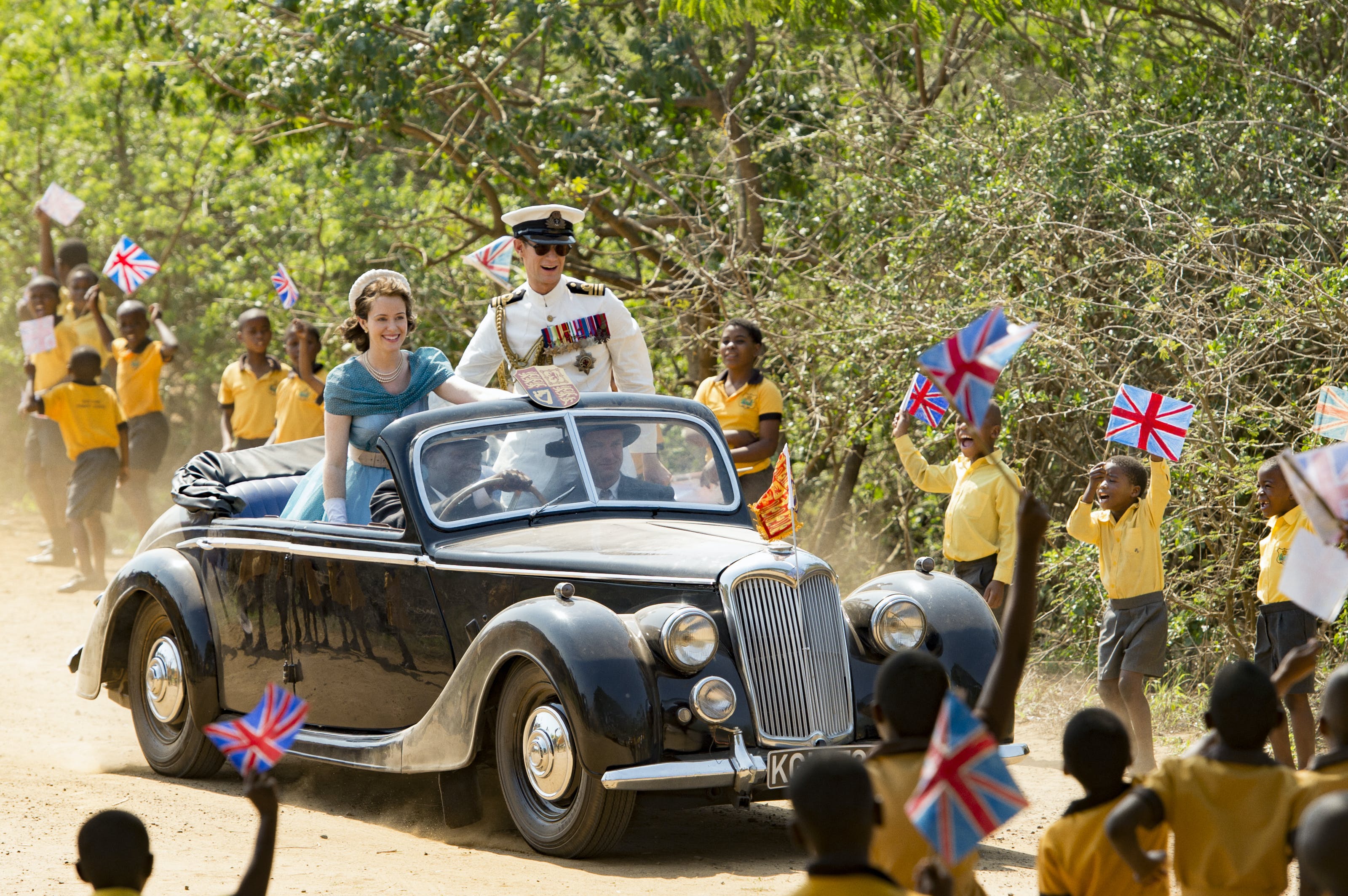 This season introduces two recurring conflicts that will last throughout Elizabeth’s reign: the balance of power between the Queen and the powerful men who surround her, and the difficulty of managing royal duties alongside a private life. The latter is explicitly discussed with bitter references to monarchs “dying” when they ascend to the throne, abandoning their old lives in favor of selfless loyalty to the Empire. For Elizabeth’s father, George VI (Jared Harris), this meant being thrust into power by the abdication of his brother, resulting in an uncomfortable reign that some viewers will remember from The King’s Speech.

This clash between duty and happiness is shared by every character, whereas Elizabeth’s political influence gets comparatively little screentime. In fact, Elizabeth herself is almost a supporting character in her own show. There’s an overwhelming focus on the men in her life, as the early episodes delve into the declining months of King George, Prince Philip’s conflicted relationship with his wife’s sovereignty, and Winston Churchill’s power struggles within the Conservative Party. We hear about Elizabeth’s strength and perseverance secondhand, but her personality mostly shines through in Claire Foy’s sensitive performance.

Even accounting for Elizabeth’s self-contained and conservative nature, it feels like The Crown should have dedicated more time to her inner life—not to mention her relationships with other women. What’s the point of making a TV show about a 20th-century empress if we spend half of every episode with Winston Churchill and a flock of harrumphing old men in tweed suits? At $125 million for a 10-episode season, The Crown is Netflix‘s most expensive series to date. That high-end budget paid for meticulous costumes by Michele Clapton (Game of Thrones), plenty of stunning locations, and some truly memorable set pieces, like King George having lung surgery beneath the looming chandeliers of a Buckingham Palace ballroom.

To a certain extent, a hefty budget is necessary for this kind of period drama, which relies heavily on atmosphere. Unfortunately, it also allowed The Crown to be painstakingly slow-moving, pumping up uneventful scenes with a dramatic orchestral soundtrack by composer Hans Zimmer (Inception). Episode four dedicates 15 minutes to the delivery of a letter about the weather, a leisurely prologue to the 1952 “Great Smog” that killed an estimated 12,000 people. One begins to suspect that the massive budget created too much leeway, inviting the filmmakers to wallow in extensive scene-setting with hordes of costumed extras, when what the show really needed was tighter storytelling. 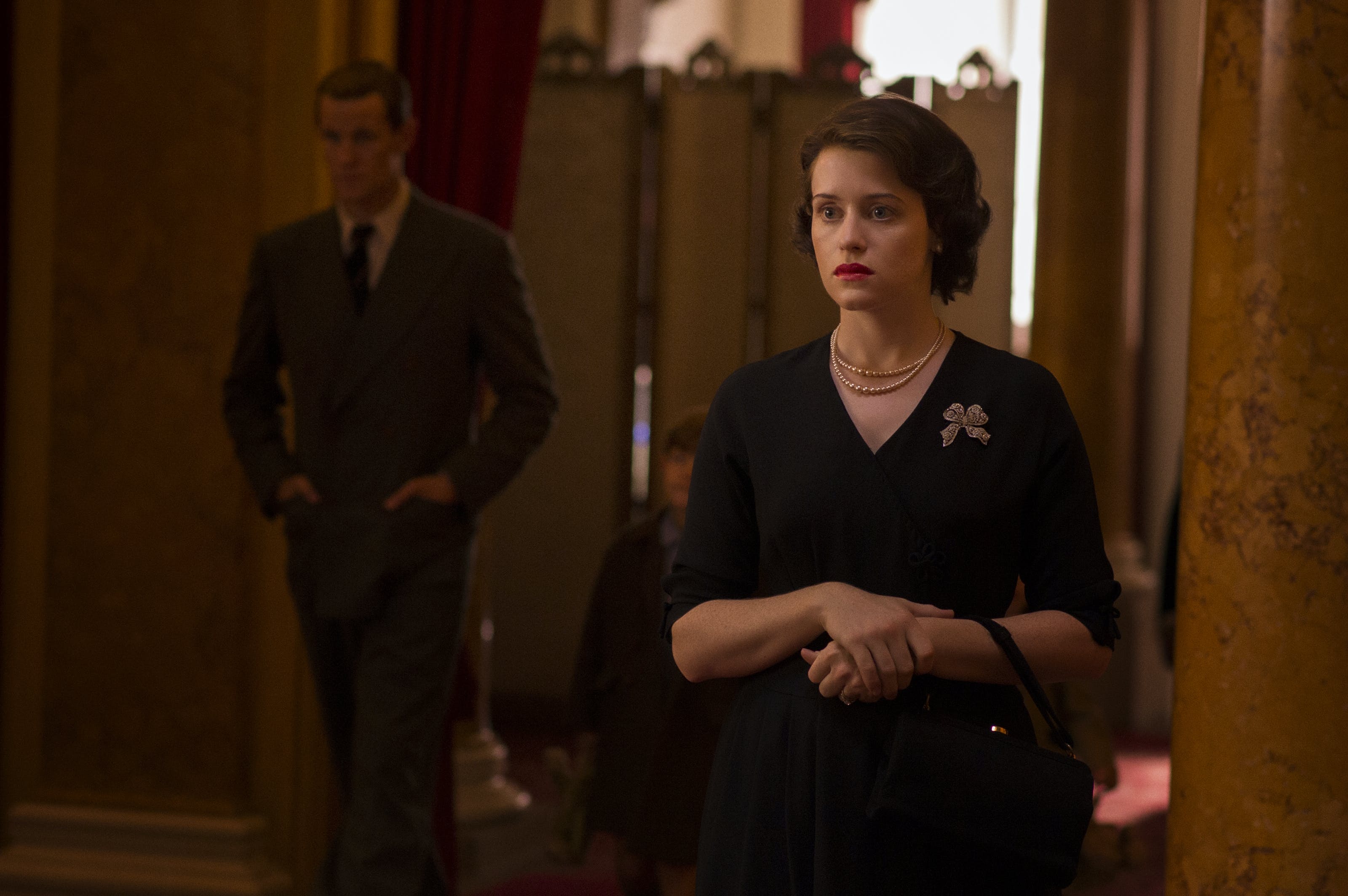 The Windsor family saga lends itself well to the familiar tropes of historical drama, with Princess Margaret falling for a married man (Ben Miles as the dashing yet modest WWII veteran Peter Townsend), and Elizabeth’s mother and grandmother as fearsome matriarchs in the vein of Downton Abbey‘s Dowager Countess. The trouble is, The Crown doesn’t lean into the melodrama of Downton or Upstairs/Downstairs, perhaps out of deference to its real-life source material.

Peter Morgan’s writing aims to examine the Windsors on a personal level, but he rarely delves deeper than the broad strokes of what we already know from decades of public coverage. Even the negative details are relatively mild, like the careful decision to show Philip and Elizabeth on safari in Kenya without actually shooting any animals. (British grouse-hunting is fine to show onscreen, but modern audiences would probably balk at Matt Smith slaughtering a majestic elephant.) When they leave Kenya to attend to King George’s deathbed, a local man respectfully kisses Elizabeth’s feet, and a young boy sings mournfully to the sky as the royal plane takes flight. Then we’re back in England, where an entire episode can be spent on debating Elizabeth’s choice of surname as a monarch.

The Crown is ideal viewing for when you want to settle down with a cup of tea and watch people agonize over problems that feel very distant from your own. But if you’re looking for insight into the real power and impact of Elizabeth’s reign, this may not be the right place to start. It’s a languid depiction where working-class people only appear in brief cameos to be charmingly simple and inspirational, and the darker side of the Empire is politely avoided. That’s hardly unusual for a British period drama of this type, but it’s a little disappointing for Netflix’s latest high-profile foray into prestige TV.