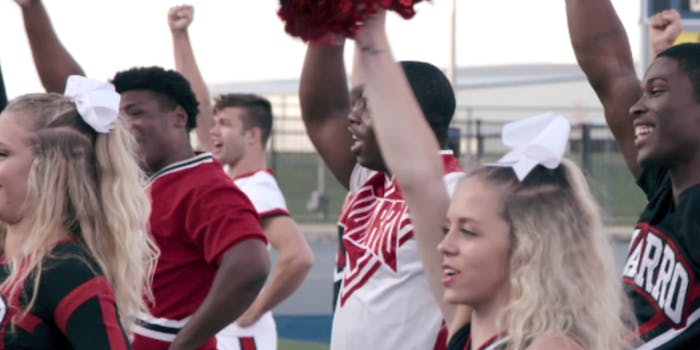 It’s the people at the center of 'Cheer' who make the Netflix docuseries as good as it is.

There’s a point in the fifth episode of Cheer where a man named Kapena describes the worst night of his life. He talks about walking around Corsicana, a small Texas town outside Dallas, contemplating suicide. With police, friends, and his cheerleading teammates scouring the streets, Kapena tried to hang himself. Kapena is the third person in Cheer to talk about a suicide attempt or suicidal thoughts. For a series about an elite collegiate cheerleading team, it’s these moments of emotional honesty that define Cheer. Had the series been content to only track the training and dedication it takes to create a championship team, Cheer would still be compelling. But the willingness of the people involved to share their pain elevates the show to something more universal. Something essential. The road to perfection is full of bumps, and Cheer knows the bumps are an essential part of the journey.

Tucked away in Corsicana, unbeknownst to everyone outside of cheerleading diehards, is royalty. Under the guidance of Monica Aldama, nicknamed “The Queen,” Navarro College’s cheer team has reached unprecedented heights. With 14 National Cheerleading Association championships and five Grand National Titles since 2000, Navarro’s sustained excellence deserves more attention. Over six episodes, Cheer brings viewers inside the team’s 2019 season. The competitive aspect of Cheer is compelling on its own, but it’s the people at the center of Cheer who make the Netflix docuseries as good as it is. Coach Aldama and her team allow the cameras to capture their highs and lows. Their honesty with one another and with viewers separates Cheer from similar documentaries.

Of the roughly 40 members of the Navarro cheer team, Cheer hones in on a few main stories. The standout is La’Darius, a supremely talented and boisterous guy who brings equal amounts of joy and agitation to the team with his no-holds-barred approach. As the layers peel back, we quickly learn that his tough exterior has formed following years of bullying and self-doubt. There’s Morgan, one of the team’s top flyers and tumblers. Having been abandoned by her mother at an early age and then by her father when he remarried (he bought Morgan and her brother a trailer and that was about the end of their relationship), calling her teammates her family isn’t an exaggeration. For Kapena, a former cheer team member turned student assistant to Monica, cheer means something else. In addition to Kapena, Morgan and La’Darius both share their brushes with suicide in some of the show’s most revelatory moments.

Those three stories stand out, but Cheer weaves in stories from all over the team to build something strong. No matter how much or how little screen time everyone gets, Cheer gives everyone their moment. Jerry, a talented stunter with shaky confidence, and Lexi, a tumbler who’s trying to leave her wild ways in the past, both make strong impressions. And, through Gabi, we get a sense of the highest points of the world of competitive cheerleading. Gabi is the most talented cheerleader—so good, in fact, that she gets flown all around to step in and help cheer teams in need of a boost. With over half a million Instagram followers, Gabi is cheer royalty. Cheer is bursting with fascinating stories.

Credit goes to director-producer Greg Whiteley and his eye for interesting subjects. Whiteley also created Last Chance U for Netflix, a series that follows junior college football programs that take in players who have run into trouble at major programs. It makes for an interesting comparison point for Cheer. Both shows cover students who have reached the pinnacle of their sports. Everything they’ve worked for is on the precipice of ending. The football players are trying to get their dreams back on track. It’s slim, but there’s hope. Cheer is different. Competitive cheerleading tops out at the college level, so when the season ends for Navarro, that’s it for most of the team. Everybody in Cheer is aware of this, which raises the already high stakes to new levels.

What’s refreshing about Cheer is that it’s about people chasing greatness, but nobody is tyrannical about it. For someone nicknamed the Queen, Monica is a tough and caring coach. A lot of coaches will says that it’s not about themselves and it sounds hollow. As the constant in a program’s longterm success, egos get inflated. But when Monica says that she wants the success for her team rather than herself, you actually believe her. The show is empathetic, but it’s still clear-eyed about its subjects, and you want these people to succeed. You want to see Navarro win because they want it so bad for each other. That’s why Cheer gets top marks.