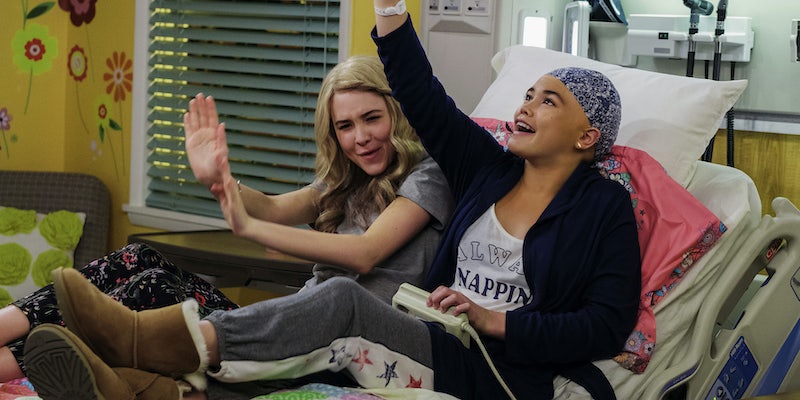 At its heart, the power of teenage friendships is exactly what Alexa & Katie, a new Netflix original series, is all about. The show follows two best friends, Alexa (Paris Berelc) and Katie (Isabel May), as they begin their freshman year of high school. Alexa has been secretly undergoing cancer treatment and grapples with the reality that her first year at high school won’t quite be as she’d imagined; she can’t try out for basketball, audition for the school play, and even has to attend class through FaceTime some days. But she has the unwavering support of her best friend, Katie, who remains by her side through thick and thin—even shaving her head in solidarity with Alexa the night before their first day of school.

Viewers shouldn’t watch expecting a nuanced or unconventional tackling of adolescence—perhaps switch over to Stranger Things or Riverdale if that’s what you’re looking for. Instead, Hannah Montana veteran and show creator Heather Wordham delivered Netflix a multi-cam TV series and it feels exactly like a Disney Channel sitcom (laugh track and all), intended more for preteens looking forward to high school.

Acting-wise, Disney XD veteran Berelc and newcomer May tackle their roles in the most authentically awkward way possible; as an adult, it was so easy to see a younger, cringe-worthy version of myself in both actresses’ characters. Apart from Alexa and Katie, the show fills in the supporting cast with the usual stereotypical characters. Alexa’s overly supportive parents and self-obsessed brother; the girls’ slightly airhead best friends; Alexa’s nemesis, Gwenny; Katie’s single-parent mother and adorably annoying younger brother; and Dylan, Alexa’s math tutor-turned-love interest.

True to the Disney spirit, there is nothing edgy about Alexa & Katie. The show remains primarily lighthearted and even a little zany. It presents teenage life in the most wholesome, undramatic way possible, even with a young girl fighting cancer serving as the lead star. The worst thing that anyone does throughout season 1’s 13 episodes is climb a 50-foot ladder to illegally change the wording on a local sign. No one drinks or does drugs. Everyone is conventionally attractive and awfully self-aware—but that’s OK.

That’s because Alexa & Katie succeeds at capturing the true spirit of teenage female companionship, providing a model example of what it means to be supportive when your best friend is going through something unimaginable. As Alexa remains defiant against both her parents and the limitations of cancer, Katie balances her out and puts Alexa’s health first before everything, including parties and formals. The show also succeeds at showing the insecurities that come with a friendship that deep, like jealousy of new friends and the fear of getting left behind.

Alexa & Katie doesn’t quite provide an accurate depiction of teenage cancer. There’s no big scary needles, no pain, or even severe exhaustion—just two incredibly fake-looking bald caps and one episode spent in a hospital room. But a dramatic TV series about the reality of teen cancer wasn’t what Wordham set out to depict; she purposefully created a comedic show about the power of friendship.

When it comes to sitcoms geared for youth, a show’s success has less to do with the number of plot holes or the authenticity of the storyline, and more to do with what life lessons its audience will take home. Alexa & Katie provides a powerful portrayal of how to handle an unavoidable disease that touches nearly every person and plagued over 5,000 adolescents in 2017. Furthermore, it teaches young viewers how to handle difficult moments in life with grace and grit, and how to be a true friend.