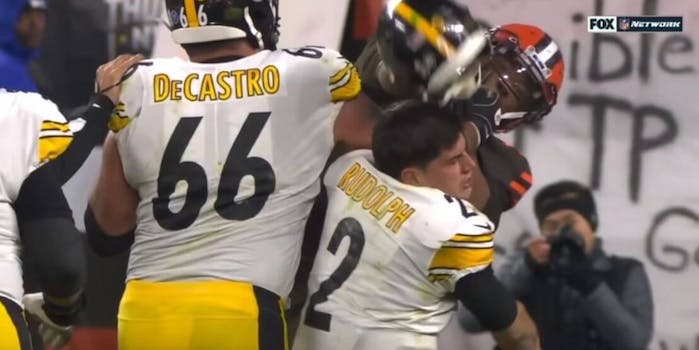 It's a messy situation.

At the end of a contentious Cleveland Browns victory vs. the Pittsburgh Steelers on Thursday night, Browns defensive end Myles Garrett whacked Steelers quarterback Mason Rudolph on his uncovered head with his own helmet during a mini-brawl.

The video for Garrett is damning. But some on Twitter are defending him, including noted football fan Samuel L. Jackson.

Garrett wrestled Rudolph to the ground moments after the Steelers quarterback threw a pass to Trey Edmunds. They tussled on the ground for a moment before Pittsburgh offensive linemen David DeCastro and Matt Feiler joined the fray to attempt to separate the two. It appeared as though Rudolph tried to displace Garrett’s helmet and kick him between the legs when the two were on the ground. In the brouhaha, Garrett eventually ripped off Rudolph’s helmet as he was moved away from the quarterback by the Pittsburgh linemen.

But Rudolph reengaged in the fight, and that’s when Garrett took a swing at him. That led Steelers offensive lineman Maurkice Pouncey to begin punching and kicking Garrett. Suffice to say, it was a big mess that will probably lead to fines and suspensions for Garrett and Pouncey.

This escalated fast. Had to go to bed early last night, so didn't see this until this morning. Gotta believe after the Incognito incident and Haynesworth stomping incident, Myles Garrett is looking at a loooooong suspension.

Thank you @NFLTotalAccess guys standing up for the fact that this started with Rudolph. Myles finished it. Spare us the fake outrage. #IStandWithMyles #Browns #mylesgarrett pic.twitter.com/XA0tp3puIx

The optics, of course, look terrible for Garrett, who tried to injure Rudolph with a potentially dangerous blow to the head. But not everybody was on Rudolph’s side, including Jackson. Particularly with Rudolph calling Garrett “cowardly” and “pretty bush league” after the game.

“Cowardly & BushLeague” from the dude that started it?? Really?? & did he say “Bitch” while trying to get up? 3 Steelers 1 Brown, QB being Aggro….played badly, fought worse!

Others also piled on Rudolph. Some blamed him for continuing the fight after Garrett had been removed from the area.

Mason Rudolph made terrible decisions all night but going after Myles Garret without a helmet was the worst one. #ThursdayNightFootball pic.twitter.com/8GY5Lxf9dp

Some said Garrett is a good person.

What the media is not going to do is portray Myles Garrett like he’s some out of control thug. Myles is the same dude who didn’t fight back when a crazed fan punched him in the face! He made a mistake and if we’re being honest… Rudolph deserved it. #IStandWithMyles pic.twitter.com/zoGuveiqXS

Luther Campbell of 2 Live Crew fame wondered what YOU did in your past life that was stupid.

everybody need to calm the hell down yes @MylesLGarrett Did something stupid yes he lost his cool the man immediately apologize. It’s funny how you glass house living people have never did anything stupid In the heat of the moment give him his punishment and move on

And then O.J. Simpson weighed in, saying that when Rudolph tried to kick Garrett in the groin, “it’s on. I’m just saying.”

In the aftermath, an #IStandWithMyles hashtag was created on Twitter, and there’s little doubt that the issue of race is simmering on the outskirts of this controversy, especially since Rudolph is a reported Donald Trump supporter and Garrett is Black.

Forget suspensions. Garrett should be criminally charged. Assaulting someone with a deadly weapon isn’t suddenly legal just because you do it on a football field.

The NFL likely will punish Garrett heavily, perhaps by suspending him for the rest of the season and/or fining him tens of thousands of dollars. But whatever happens to Garrett, it’s unlikely that anybody will be fully satisfied.