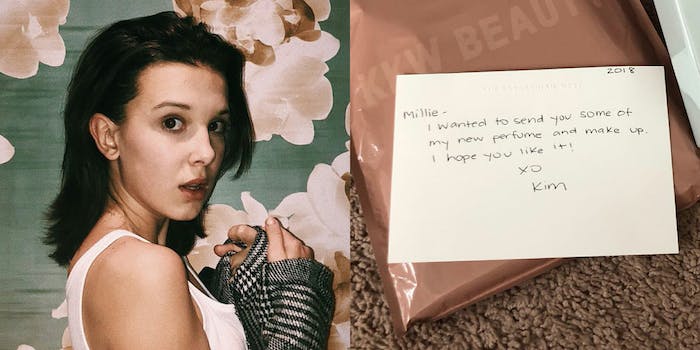 Sorry haters, you'll just have to deal with it.

When it comes to Keeping Up With the Kardashians, Millie Bobby Brown is an outspoken fan. Kim Kardashian returned the goodwill this week by sending over a Valentine.

Brown on Tuesday posted her holiday gift package from Kardashian that includes all three scents of Kim’s new Valentine’s Day-themed perfume line: “Bae,” “BFF,” and “Ride or Die.” (“Bae” is for your love, of course, but it remains unclear how “BFF” differs from “Ride or Die” in terms of intended recipients. Both are slang for “close friend.”)

“Thank you… for these amaaaaazing gifts!” Brown wrote on Twitter, followed by the hashtag: “#freakingout.”

Kardashian and Brown have been Twitter buds since the fall. The 13-year-old Stranger Things actor is already a huge social media star, so the gesture was similarly a strong marketing strategy. Maybe too good: If you’re interested in surprising an associate—BFF, Ride or Die, Bae, or otherwise—Kardashian’s limited-edition Kimoji Hearts perfumes are, regrettably, all sold out for the season. (Let this serve as a lesson that Valentine’s Day rewards planners who are tuned into their Twitter feeds, and a reminder to make dinner reservations on Open Table while you still can.)

For her part, Brown remains in a rumored romance with Music.ly star Jacob Sartorius and was spotted backstage at his Atlanta concert last week.