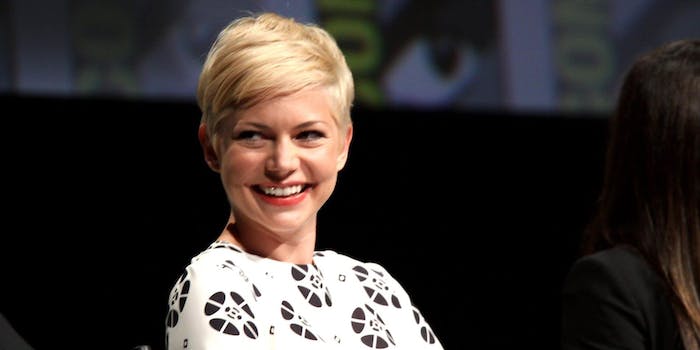 Winning for her role in 'Fosse/Verdon,' she gave an eloquent speech about pay inequality.

Winning an Emmy for her starring role as Gwen Verdon in FX’s Fosse/Verdon, Michelle Williams used her acceptance speech on Sunday to call out the gender pay gap in Hollywood.

“The next time a woman—and especially a woman of color, because she stands to make 52 cents on the dollar compared to her white male counterparts—tells you what she needs in order to do her job, listen to her,” said Williams. “Believe her.”

She went on to thank FX and Fox 21 studios for offering equal pay to her and her co-star Sam Rockwell. She also highlighted the need for studios to respect actors’ artistic requests—which in her case involved investing money in dance and vocal lessons to perfect her performance as Gwen Verdon.

Williams was previously at the forefront of a pay disparity scandal for the movie All the Money in the World, where she was paid a fraction of Mark Wahlberg’s paycheck during reshoots. While Wahlberg got $1.5 million, Williams was paid an $80 per diem for the same period of reshoots, meaning she was offered less than 1% of his earnings.

The reshoots were necessary in order to replace a role played by Kevin Spacey, and Williams wasn’t aware that Wahlberg’s agents negotiated a huge pay bump behind the scenes. In fact, she was willing to film the reshoots for free. Both actors were represented by the same agency, and this incident evidently inspired Williams to become more outspoken about pay equity in the industry.