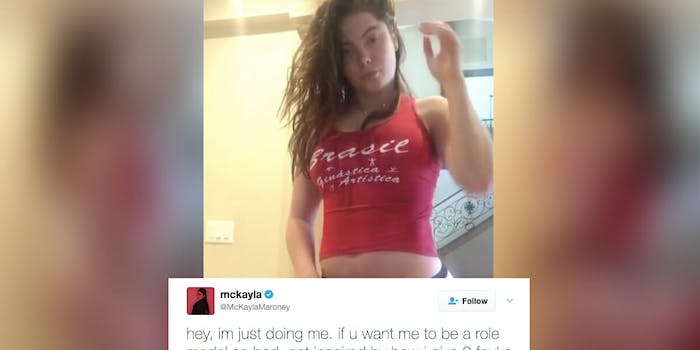 The gymnast-turned-aspiring-musician has dabbled in these waters before.

The former Team USA gymnast, perhaps best known for her instant-classic “not impressed” face upon receiving the silver medal in the 2012 Olympics, made waves on Instagram over the weekend after she posted a brief video of herself dancing in a thong. The eight-second clip has tallied over 800,000 views since its posting on May 13.

Many fans and followers of the 21-year-old’s social media accounts assumed she had been hacked—and not without cause. Photos of the then-underage gymnast were a part of the huge celebrity nudes leak that became known across the internet as Celebgate or the Fappening. But Maroney quickly stomped out those rumors, bluntly stating on Twitter that she wasn’t hacked and encouraging haters to “unfollow if u need to.”

hey, im just doing me. if u want me to be a role model so bad, get inspired by how i give 0 fcuks and go do u

Indeed, it’s not even the first time Maroney has posted video of herself dancing in lingerie. In March, she posted a moody video of herself making sultry faces while wearing a triangle-cut bikini top or bra as music plays in the background.

Her most recent “world premiere” came out at the tail end of a long string of tweets that seem to reference a recent breakup.

i’d rather have no idea where i’m going, then comfortably continue to live in circles

The previous video came out about a week after a similar thread.

second chances just remind me why i don't give them

i think it's important to realize u can miss something, but not want it back

u were my favorite almost

Similarly, both instances were followed by selfies in a recording studio.

Maroney told Us Weekly last summer that she had undergone a bit of an “identity crisis” after quitting gymnastics but was excited to start her career making “vulnerable pop.” She even tweeted in March, “if i die, please turn all my voice notes into songs” and that she’d been up all night writing songs again.

Her highly anticipated debut single “Ghost” was due out for release Sept. 8, 2016, though it’s difficult to track down if it ever actually premiered anywhere. Perhaps she decided to trade vulnerability for confidence and forge ahead on a new path altogether.