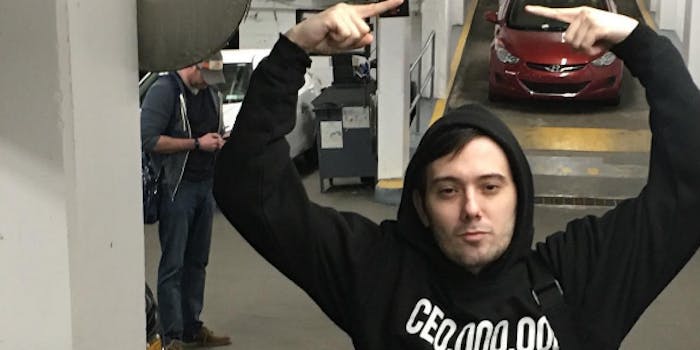 It looks like the fraudster... may have been frauded.

It looks like Martin Shkreli might be the victim of some fraudulent business practices after paying $2 million to own a one-of-a-kind, unreleased Wu-Tang Clan album back in 2015.

Shkreli first became a household name after he raised the price of a lifesaving drug by 5,000 percent—adopting the trolly persona of Pharma Bro in the scandal’s wake. Apparently eager to keep the headlines coming, the 34-year-old bought Wu-Tang’s Once Upon a Time in Shaolin sight unseen, making it the most expensive record ever sold. The record came in a gilded box, engraved with the Wu-Tang crest. Shkreli is trying to sell the album on eBay, and as of this post’s writing there are 10 hours left in the auction with the highest bid set at just over $1 million. He admits in the product description that he still hasn’t “carefully listened to” it.

There’s been a satisfyingly ironic development in the story, though: Bloomberg did some snooping this week, and it turns out the record might not even be an authentic Wu-Tang Clan production after all.

At the time Shkreli bought the album, members of the group seemed on board with the whole stunt in the media. Founding Wu-Tang member RZA was photographed holding the record alongside Moroccan producer Cilvaringz, and everything felt like a Tidal announcement in terms of exclusivity. But with a rap group whose lineup is fluid—with core members anchoring their roster as bit-players are free to come and go—it seems like other guys in the group had a very different understanding of what they had been contributing to during those sessions.

Killa Sin, who appears on the album but typically raps with a different group (Killarmy—part of Wu-Tang’s extended “family”), says that at the time, he was under the impression “the work he was doing with Cilvaringz wasn’t an official Wu-Tang project.”

“The way he presented it was it was going to be basically his album,” he told Bloomberg. “And he wanted me to do some work for him.” It wasn’t until much later that he learned his verses were on Once Upon a Time in Shaolin.

And Killa Sin isn’t alone—both Method Man and U-God’s managers confirmed to Bloomberg that the rappers were under the impression they were contributing verses to a Cilvaringz album, not recording Wu-Tang songs.

“When we did the verses, it was for a Cilvaringz album,” said James Ellis, Method Man’s manager. “How it became a Wu-Tang album from there? We have no knowledge of that.”

Shkreli is currently being held in a federal jail in Brooklyn, New Yok without bail after offering to pay his Facebook followers $5,000 in exchange for a lock of Hillary Clinton‘s hair.