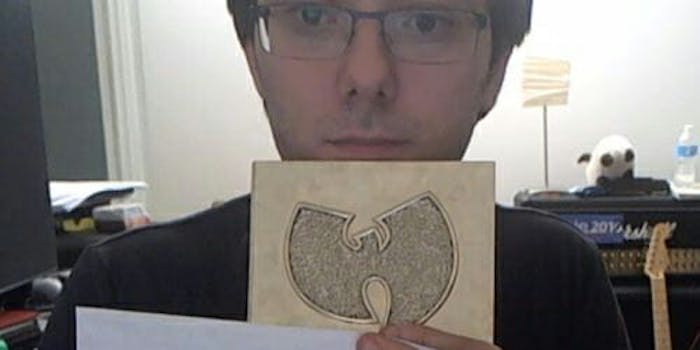 ‘At any time I may cancel this sale and I may even break this album in frustration.’

Shkreli posted the only copy of the album Once Upon a Time in Shaolin to eBay Tuesday night. At the time of writing, the highest bid was $100,500, up from the $1 starting price.

The description of the eBay listing addresses the hate Shkreli received for acquiring the album in the first place.

“I decided to purchase this album as a gift to the Wu-Tang Clan for their tremendous musical output,” Shkreli wrote. “Instead I received scorn from at least one of their (least-intelligent) members, and the world at large failed to see my purpose of putting a serious value behind music.”

Although Shkreli faces the possibility of having his prized object seized for restitution following his conviction, the former pharmaceutical CEO insisted that he’s not selling the album “to raise cash.”

“I hope someone with a bigger heart for music can be found for this one-of-a-kind piece and makes it available for the world to hear,” Shkreli wrote.

Shkreli was convicted in August of fraud for raising the price of a potentially lifesaving HIV drug by 5,000 percent in 2015. A potential juror was dismissed from the trial for saying Shkreli “disrespected” the Wu-Tang Clan.

In the eBay listing, Shkreli said he’ll pay up to $25,000 in legal fees related to the sale. He added that he reserves the right to pull out of the deal at any time.

“At any time I may cancel this sale,” he wrote, “and I may even break this album in frustration.”