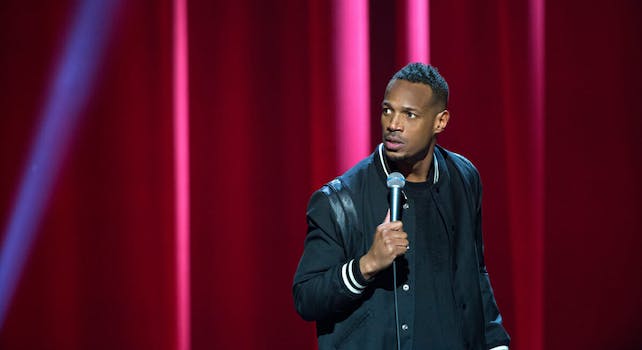 Marlon Wayans might offend you with his new comedy special, but that’s the point

'Woke-ish' is his first comedy special ever.

Do we have a problem?

Wayans’ first-ever standup comedy special Woke-ish streams this week on Netflix. As the title suggests, you can expect him to be aware of prominent social issues such as race and homophobia. You can also expect him not to take any of it too seriously. He’s not totally out of touch with these issues; he just understands that he offends people.

For the youngest of 10 siblings, Wayans’ first standup special was years in the making. He starts off relating to everyone with one common fact—he doesn’t understand rapper Desiigner’s lyrics. Wayans reminisces about the old days when hip-hop sounded more like Dr. Seuss and less like a deadly drug cocktail prescription. In Woke-ish, he admits he’s young in the face and old in the knees, but he utilizes the stage with a little bit of Katt Williams’ physicality, eye-popping facial expressions, and cult-classic callbacks from his movies.

Unlike many comedians, he comes from a dynasty of humorists. Being a father himself, Wayans said his family is deeply embedded in his routine—directly and indirectly.

“Everybody has a crazy family, I just had the craziest family,” he told the Daily Dot. ”You know, a lot of laughs—I have great big brothers, a mom and dad who loved me, sisters that adored me and I had a great childhood despite all the poverty, the hunger, and the fights. We were protected by love, and I wouldn’t change a thing about my childhood.”

Now that he’s a dad, Wayans can draw material from his kids. In the special, he talks about his daughter coming out to him and his son’s teen angst.

“I try to base my comedy off truth,” he says. “That is what is humorous. A lot of it is not just funny, but bitingly real for me. To me, to be funny is one thing, but to be good and to make you feel something, that gives it a whole other texture.”

Later, that character became one of the most memorable parts of In Living Color’s five-season run. Does Wayans know he is doing the same thing his brother did? Of course—he’s woke-ish.

He looks up to his brothers, and you can tell how much respect he has for them in our interview. Wayans explained his family’s humor using a camera analogy.

“[Our humor is] the same but different, we all grew up in the same house so our lenses are similar,” he said. “Mine is probably more of a fisheye. Keenan’s is probably a nice wide shot; he sees the whole scope of things. Damon’s is the close-ups, and Shawn’s is somewhere in the middle. We’re all different.

“When it came to standup comedy, [Damon] was the guy that really inspired me to be a standup… I love Richard Pryor and Eddie Murphy—of course, those are two of the greats—but my brother Damon really is the guy for me. I grew up in the house with a legend. And I’m grateful for that.”

His new special sticks to his family’s offensive tradition for Black audiences. Not that white people can’t watch this special and enjoy it, it’s just tailor-made by someone whose specialty is in cult-classic Black humor. Insert references to Don’t be a Menace to South Central While Drinking Your Juice in the Hood.

When asked what he thought about Black Panther, Wayans summed up his experience in Hollywood and the success of the superhero movie pretty well.

“I applaud it. It’s something that I’ve been working for my whole career,” Wayans said. “It feels good to have our culture and our heroes embraced, especially at a time like now, worldwide. It’s something we’ve been screaming and hollering for years. And you know with my brothers we had a lot of success with the Scary Movie franchise. That was a worldwide success, and we had a lot of success with White Chicks and Little Man. They say comedy from Black people don’t travel. We kind of broke the mold with that. To see Black Panther come out and just blow the walls, the roof, the floor, and everything up, I just applaud it, man. I feel it’s the most lifting thing I’ve seen this year.”

On Thursday night, Jimmy Fallon asked why his special is called Woke-ish and not Woke. Wayans gave a classic Metallica answer, saying that he sleeps with one eye open. He keeps the other closed to capture the humor in it all.

So, once again we must ask the great question of our time—do we have a problem? Some audiences might, but that’s the point.