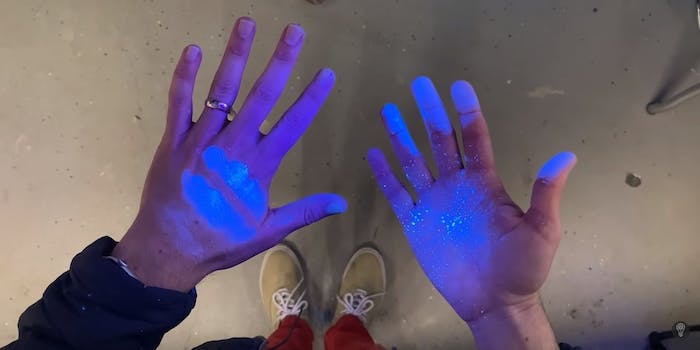 All he needed was a classroom full of third-graders and an invisible powder.

YouTube scientist Mark Rober is showing how easy it is to transfer germs—and coronavirus—between people. Rober enlisted the help of unwitting third-graders to help spread a fake virus—and to then spread that information to anybody watching on YouTube.

Rober, the former NASA engineer who once made an epic glitter bomb to combat porch pirates, acknowledged that it’s impossible to see actual germs on your body and watch them spread from one person to another. But he did the next best thing: He used a powder called Glo Germ that is invisible to the naked eye but can be seen under a black light.

Using a makeup brush, he distributed the powder—which can be transferred from one person to another or to other objects, the same way germs spread—on the hand of a third-grade teacher. She then shook the hands of her three of her students to transfer the Glo Germ.

Then, the kids had a normal day in the classroom, playing with Lego blocks, drinking from a water fountain, hanging on the monkey bars during recess—and touching everything in sight.

A few hours later, Rober checked the progress of the glowing powder and how much it had spread. Spoiler: It spread a lot.

Rober said that’s why it’s so important to wash your hands and clean objects with disinfectant. There plenty of other lessons to learn in the video, too.

“The ultimate defense against catching a virus is just don’t touch your face,” he said. “Your eyes, nose, and mouth are like the single weak spot on the Death Star when it comes to viruses. That’s the only way they can get in to infect you.”

It’s a fascinating video—and kind of a terrifying one, too—that makes it easy for everybody, from third-graders to their grandparents, to understand how easy viruses can be transferred. The video has certainly spread rapidly, accumulating more than 4.7 million views since it was uploaded on Wednesday. Rober also sounded a note of practical optimism.

“Take this seriously, but there’s absolutely no need to panic,” Rober said near the end of the video. “We’ve totally got his.”