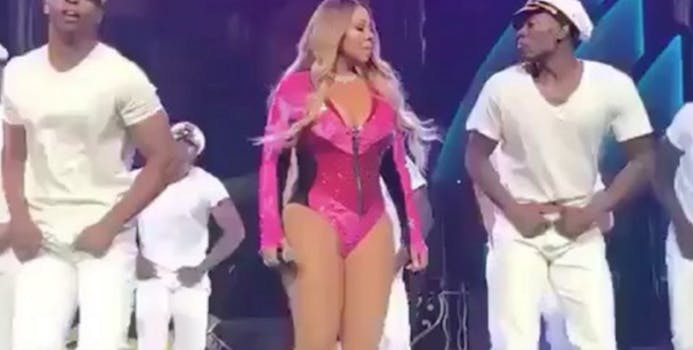 Screengrab via the Shade Room/Instagram

Did the pop star actually phone it in?

Pop icon Mariah Carey does not compromise when it comes to her art. If she shows up to film a cameo in a Will Ferrell movie and dislikes the premise of the gag, she’ll walk. She’ll shade Beyoncé and not think twice about it. She dresses boldly onstage, nevermind the sexist backlash.

So if Carey doesn’t reinvent the wheel during her live dancing, or hell even phones it in, that’s her prerogative.

Footage of Carey apparently doing just that is making the rounds this week, with fans in a frenzy about her less-than-enthusiastic dancing during the “Honey” Bad Boy remix at a recent Las Vegas concert. You be the judge:

Critiqued for barely moving—backup dancers mold Carey like a plastic doll, into poses, during the routine—the singer lets her team handle the visual dazzle during Mase’s rap breakdown. The dance dust-up comes in the wake of her botched singing on New Year’s Eve, leading the perennial haters to hint at retirement.

To be fair, the appeal of Mase’s rapping is its lethargic, understated cadences: seems like a fine time to work in a break during the set.

Moreover, the “Honey” dance routine, largely unaltered for almost 20 years, has always been calmly cool and dependent on adorning backup sailors. Carey’s a world-class singer, lest we forget. This isn’t a Britney Spears residency where the show is built around elaborate choreography.

The non-Mase version of “Honey” was just as big of a hit. It’s nice to see Carey remain inclusive when it comes to his rap cameo, and continue working it into the show. Even if it means she catches heat for doing so.