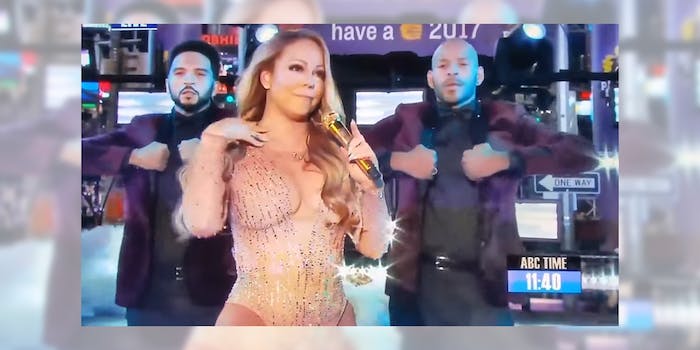 Over 40 in a flesh-colored bodysuit: The slut-shaming of Mariah Carey

Say what you want about her performance, but shunning her outfit is downright ageist.

Let’s get one thing straight: You don’t need to worry about Mariah Carey.

The pop icon’s New Years’ Eve meltdown, in which the chanteuse’s performance was plagued by tech errors, has left many on the internet speculating whether her nearly three-decade-long career is over. If you’ve been under a rock for the past four days, here’s what happened: Following a flawless performance of “Auld Lang Syne,” Carey barely sang along to “Emotions,” her 1991 hit. Afterward, a badly lip-synched rendition of “We Belong Together” revealed the track to be pre-recorded.

Is this her Ashlee Simpson moment, critics have wondered, where stardom disintegrates before our very eyes? When Simpson belts out a tune like this, I will consider that a question worthy of my word count.

What does need to be addressed, however, is a pernicious byproduct of the singer’s public debacle. Say what you will about how Carey has handled the snafu: Is her rage against the machine that of a professional who simply doesn’t have time for buffoonery or a diva who couldn’t admit that she messed up? You decide. But on Twitter, social media users have taken her to task for another reason—what she was wearing when it all went down. Despite the 35-degree weather, Carey sported a flesh-colored sparkly body suit, which looked transparent on camera. Britney has worn a similar ensemble literally dozens of times, but I digress.

The bevy of tweets attacking her appearance—many of which refer to her as a “whore” or a “slut”—are as varied as they are vile. Some, however, are unintentionally funny, like the one in which user “OneManOneWoman” blames the glitch on the “raving group of homosexuals” Carey surrounds herself with.

Choose your favorite below, and don’t worry: There are so, so many more tweets where that came from. Twitter, as always, is a never-ending rabbit hole of slut-shaming.

I wanted to say that Mariah Carey Looked like a slut and a whore on the New Years Eve ceremony. She needs some help and she needs Jesus.

@nischelleturner WHY NOT ASK MARIAH CAREY WHY SHE HAS TO DRESS LIKE A SLUT IN ORDER TO PERFORM, SHE, BEYONCE, DISGRACEFUL.

@MariahCarey Wear clothes closer to your age. You looked like a slut on stage.

This isn’t the first time that Carey has been on the receiving end of social media bile because she dared to show a little skin—or, hey, maybe a lot of skin. In October, U.K.’s Telegraph shielded the pop star from criticism of her sexy Halloween costume, in which she dressed as an impossibly busty red devil, complete with a tight-fitting corset. But anyone outraged about her All Hallows Eve look has clearly never browsed her Instagram: The woman loves to show off her breasts, which really should have their own account.

Since first owning the charts with her octave-spanning “Vision of Love” in 1989, Carey has amassed 18 number-one hits, more than any other artist except for the Beatles. “One Sweet Day,” her collaboration with Boyz II Men, still holds the record for the most consecutive weeks on top the Billboard Hot 100.

This is the same woman, mind you, who has already risen from the ashes once before. Prior to the release of Glitter in 2001, Carey was hospitalized after suffering a severe emotional breakdown; she famously appeared unannounced on Total Request Live, handing out ice cream to host Carson Daly and audience members. At the height of her meltdown, Carey left cryptic voice messages for her fans on her website, claiming that she was taking a break from music. All of this happened before the movie, a notorious bomb that swept the Razzies, even premiered.

As if that weren’t bad enough, Virgin Records America bought out their contract with Carey following poor sales of the film’s soundtrack. That means a record label literally paid her $50 million to go away.

But Carey bounced back with a vengeance. In 2005, the melisma queen released The Emancipation of Mimi, which was nominated for 10 Grammys and spawned three number-one singles. “We Belong Together” spent 14 weeks at the highest peak of the Billboard charts, an achievement surpassed only by—yup, you guessed it—Mariah Carey. “One Sweet Day” led for 16. When it comes to giving up, Ms. Carey doesn’t know her.

And she shouldn’t stop. Women like Mariah and Madonna should be allowed to flaunt whatever they damn well please without our approval; certainly, they’ve earned the right. Instead of asking our pop icons to go quietly into that good night with a warm shawl, hot cocoa, and a copy of The Bridges of Madison County, let’s give them the space to redefine what sexy is at every age. I don’t want to live in a world where the woman who sang “Honey” isn’t wearing nearly nothing in the freezing winter, even well into her 60s.