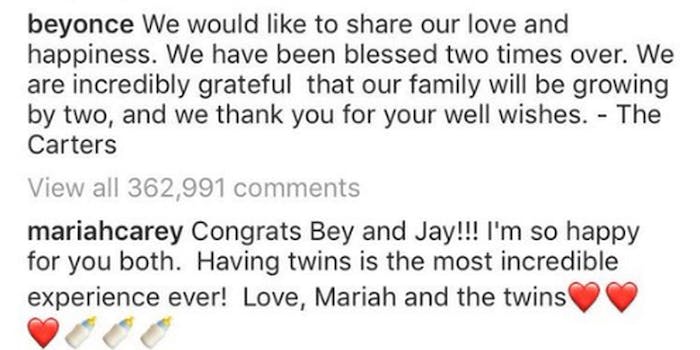 Carey has long been the queen of shade.

Mariah Carey congratulated Beyoncé on her twin pregnancy on Thursday, and of course it was immediately construed as high-end shade.

Let’s face it, that’s because it probably is. Carey, a shade gold medalist many times over, most recently put the “I don’t know her” shade on both Demi Lovato and Ariana Grande.

Now with Beyoncé’s baby publicity, Carey might feel a little left behind.

The conception is overrun with rumors, with some speculating about in-vitro fertilization, which raises the potentiality of twins. There’s even speculation on the reasons for her pregnancy, per Radar Online:

“For the past year, sources told Radar that Beyoncé and her 47-year-old “99 Problems” rapper husband have struggled to keep their marriage on track. Ultimately, a source said, the superstar couple decided that having a baby would be the best way to save their broken marriage!”

Lastly, for you Illuminati foil-hatters:

But was Carey earnest or shady in her IG comment to Queen Bey? It doesn’t matter, because she has a new single out today:

Mariah Carey teams up with YG on her '90s-inspired single "I Don't." Listen: https://t.co/ZLN2RH6whF pic.twitter.com/bmGq9VaMGr